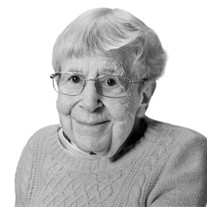 Agnes Margaret Kuechle Steil, died at Assumption Home in Cold Spring on October 6, 2020. Her life will be celebrated with a mass of Christian Burial at St. Boniface Church, Cold Spring, on Monday, October 12 at 12:00 PM, Father Thomas Andert officiating. Visitation will be prior to mass at church from 10:30 to 12 pm. Internment will be held at Saint Boniface Cemetery following the service. The family requests that all attendees observe social distancing and wear face masks. For those unable to attend, the service will be livestreamed at www.christcatholic,com. Agnes was the heart and soul of our family. She loved us unconditionally and with that love and sometimes a pat on the behind, taught us to become strong, independent and respectful people who are mindful of the bonds of family. Agnes was born June 20, 1918 on a farm near St. Nicholas to Joseph and Theresa Doetzel Kuechle and was the ninth of twelve children. With her brothers, sisters and parents she did farm chores and helped her mother with the manual labor of a 1930s farm housewife: cooking, baking, washing, butchering, making butter and preserving food. Her parents and a strong Catholic faith were the foundation of her generous, loving and hardworking nature and helped provide the strength to follow her goal of becoming a teacher. While high school graduation was unusual for many of her generation Agnes attended St. Anthony Parochial School in Watkins and when low enrollment caused it to close in 1935 she finished her senior year in Cold Spring, living with a local family and working for room and board. She graduated in the spring of 1936 and was named class salutatorian. She went on to attend St. Cloud State Teachers College, and in 1938, after earning a two-year country school teaching certificate, began her teaching career in the District 38 country school near Pearl Lake. Marcus Steil from Cold Spring caught her eye at a shower dance, and they were married on June 23, 1941. They shared their lives for 54 years until Marcus’ death in 1996. Her teaching career paused as she took on the fulltime job of raising nine children. She worked hard, canning vegetables, sewing, baking bread, cooking and making a home for all of us. In 1950 she and a few friends formed a bridge club which met every two weeks for more than 40 years. Her Catholic faith continued to be a cornerstone of her life and at St. Boniface Church in Cold Spring she participated in St. Julian’s Mission Circle, Christian Mothers Society and was a greeter at mass. Her favorite prayer was “Lord, give me patience and strength”. Teaching was still on her mind. In 1966 she was offered a substitute teaching job in the Rockville Country School and continued her part time work the next year in Jacobs Prairie and St. Nicholas helping students learn to read. In 1968 she began taking evening classes at St. Cloud State University and received her B.S. degree in education after the last summer session in 1970. From 1970 to 1980 Agnes taught full-time in Cold Spring, Richmond and Rockville, then part time until 1984. She especially enjoyed teaching reading. But family was always first. The land she and Marcus purchased on Big Fish Lake became a gathering place for her family, much as the farm had been for her father and mother’s families. She was happiest when her family was near and never seemed to mind adding another plate to the table. Her address book was packed with entries and she kept up with all of us through letters and phone calls. When she saw that her children and grandchildren were using email and Facebook to communicate, she got a computer and joined in. She did what she had to do to stay in touch with all of us. She volunteered at the nursing home and the senior center, serving for a time on the Board of Directors for the Senior Center. She became a Hospice Volunteer in 1993. Her passions were playing cards (especially 500 and euchre), traveling, dancing and gardening. She and Marcus traveled to Europe and Hawaii and after his death she joined bus trips to Branson and the East Coast. As her strength ebbed, she decided to move to Assumption Home, living first in an assisted care apartment and later in the nursing home. In 2006 her children published her biography which was titled “Connections”, the perfect description of Agnes’ life. She wanted all of us, her Kuechle relatives and her own family to stay connected. Agnes is survived by her children David (Karen), Paul (Elizabeth), Ken (Emily), Dan (Mary), Mary, Owen (Kristi), Mark (Brenda Post), Brenda Scharping (Jeff), 23 grandchildren, 30 great-grandchildren and her sister-in-law Delores Klein Kuechle. She was preceded in death by her husband Marcus, her parents, her daughter Lora, her son-in-law Curtis Pecore and her siblings: Joseph, Alois, Mary, Gilbert, Lawrence, Rosa, Alphonse, Clemens, Eleanora and Alvin. Agnes’ family wishes to thank Assumption Nursing Home and St. Croix Hospice for their loving care of our mother. Funeral arrangements made by Wenner Funeral Home, Cold Spring. Memorials will be given to “Marcus and Agnes Steil Family Fund at Rocori Area Community Foundation.”

The family of Agnes Margaret (Kuechle) Steil created this Life Tributes page to make it easy to share your memories.