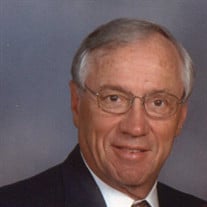 A man who lived his dreams. Al Kern was many things to many people: husband, father, grandfather, great-grandfather, uncle, trusted advisor, friend, mentor, pilot, entrepreneur, and business owner. He was caring and generous. He will be deeply missed. Al passed away peacefully on September 15, 2021, at his home on Grand Lake with his devoted wife by his side. He was born on December 15, 1941, to Arnold and Anna Kern in Yellow Medicine County, Minnesota. The family relocated to a farm near Watkins where Al attended school and graduated from Eden Valley High School. He served as a National Guardsman and in the Army Reserves. Al married Doreen Salzer on September 2, 1963. He graduated from St Cloud State University with a degree in accounting and worked as a CPA, partnering with colleagues to establish the accounting firm of Kern, DeWenter, Viere. Upon retirement, Al served as a trusted advisor and founder for Granite Equity. He was a member of Holy Cross Catholic Church, St Cloud Lions Club and American Legion. Al had an adventurous spirit. He was an avid hunter and fisherman, with his interests ranging from bowhunting and fishing locally to big game hunting that led him to travel worldwide. He obtained his pilot’s license and used float planes to take excursions into the north country and Canada. Al loved snowmobiling with friends and even raced for Polaris. He enjoyed playing cards, especially cribbage, and was known as skilled and intuitive at any game of strategy. He had a way of beating the odds. Al is survived by his loving wife, Doreen; children, Julia (David) Sheffield, Jeffrey Kern (Jessica Randazzo), Jennifer (Steve) Schwieters, Jonathan Kern; grandchildren, Briana (Kent) Pawelk, Bryan Sheffield, Samuel Kern, Olivia Kern, Madison (Justin) Brinkman, Ryan Schwieters, Brooke Schwieters, Nicholas Kern and Alexander Kern; great-granddaughter, Charlotte Brinkman; siblings, Kenneth (Margaret) Kern, Richard (Butch) Kern (Kay Regnier), Shirley (Darrel) Nemeth; sisters-in-law, Eileen Kern, Lynn Robertson, Mary Kern. Al is preceded in death by his parents; siblings, James (Eileen) Kern, Gerald Kern, RoseMary Kern, David Kern and Thomas Kern. Mass of Christian burial will be held at 10:30 a.m. on Wednesday, September 22, 2021, at Holy Cross Church in Pearl Lake, with military honors to follow. Visitation will be held at Wenner Funeral Home in Richmond on Tuesday, September 21st from 4 to 8 p.m. and from 9 to 10 a.m. at the Church prior to the funeral. Memorials preferred to the Catholic Foundation for the Diocese of Saint Cloud or to a charity of your choice.

A man who lived his dreams. Al Kern was many things to many people: husband, father, grandfather, great-grandfather, uncle, trusted advisor, friend, mentor, pilot, entrepreneur, and business owner. He was caring and generous. He will be deeply... View Obituary & Service Information

The family of Alvin M. Kern created this Life Tributes page to make it easy to share your memories.

A man who lived his dreams.

Al Kern was many things to many...

Send flowers to the Kern family.