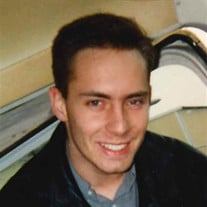 Mass of Christian Burial will be 3:00 p.m., Monday, March 14, 2016 at St. Boniface Catholic Church in Cold Spring, MN for Anthony Pelzer, age 39, who died in Louisville, KY. Inurnment will be in the St. Boniface Parish Cemetery. Visitation will be from 4:00 – 8:00 p.m., Sunday, March 13, 2016 at the Wenner Funeral Home in Cold Spring. Parish prayers will be at 7:45p.m. Tony was born in Minneapolis to Anthony E. and Monica E. (Schreifels) Pelzer. He grew up in Rockville and graduated from Rocori High School in 1995. He graduated from St. Cloud State with a degree in Aviation. He served in the U.S. Marine Corps. Reserve from 1995-2000. Tony flew commercially for Republic Airlines and later was a rental property owner and manager in Louisville, KY. He enjoyed flying, sailing with his mother, spending time with his sister Debbie and his nephews, Aiden and A.J., and his niece, Abby. Survivors include his mother, Monica; sister, Debbie Sorenson; nephews, Aiden and A.J. Sorenson; niece, Abby Sorenson; step-mother, Elizabeth; and step-siblings, Dr. Allen (Diane) Schnaser, Catherine Martin, Susan (David) Kestner, Joseph (Mary) Mayers and Joanne (Jason) Chapman. He was preceded in death by his father, Tony Pelzer; and his grandparents.

The family of Anthony Pelzer created this Life Tributes page to make it easy to share your memories.

Send flowers to the Pelzer family.