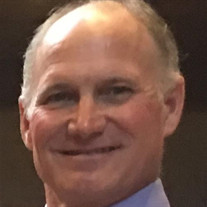 Mass of Christian Burial will be 11:00 a.m., Wednesday, July 31, 2019 at Sts. Peter & Paul Catholic Church in Richmond, MN for Barry Schramel, age 50, who died Friday at the St. Cloud Hospital surrounded by his loving family. Burial will be in the parish cemetery. Relatives and friends may call from 4:00 – 8:00 p.m. Tuesday evening at the Wenner Funeral Home, Richmond, MN. Visitation will continue 9:00 – 10:30 a.m. Wednesday morning at the funeral home. Barry was born on March 16, 1969, in Paynesville, MN to Ralph (Popcorn) and Ann (Spanier) Schramel. He grew up in Richmond, MN and graduated from Rocori High School in 1987. He met his wife, Bobbi, in September 1989 and they were married in August 1994. They were blessed with three daughters, Tyler Ann, Hunter Marie, and Brooke Leigh. He was a proud Papa to his grandchildren, Remington Leigh and Brock Ze. Barry was very active and could build and fix most anything. He was a true "Jack-of-all-trades." His current project was remodeling Hunter's house. He loved to hunt, fish, sit around the bonfire, travel, take out the boat "Da Rooster," and watch the Vikings. He loved his Harley and was so proud to get his John Deere, but most of all to be with his family and friends. Survivors include his wife, Bobbi; daughters, Tyler (Brandon), Hunter (Beau), Brooke; grandchildren, Remington and Brock; parents, Ralph and Ann Schramel, Richmond; brothers, Brad, Richmond, Mark (Maria), Maple Lake, sister, Stacy (Dennis), St. Cloud; In-laws, Bob and Barb Essig; Joselynn (Brian) Robinson, Nick (Tara) Essig, Nathan (Caroline) Essig, Robby (Ashley) Essig, Celeste (Matt) O'Connor; many nephews and nieces. He was preceded in death by his grandparents and friends.

Mass of Christian Burial will be 11:00 a.m., Wednesday, July 31, 2019 at Sts. Peter & Paul Catholic Church in Richmond, MN for Barry Schramel, age 50, who died Friday at the St. Cloud Hospital surrounded by his loving family. Burial will be... View Obituary & Service Information

The family of Barry Ray Schramel created this Life Tributes page to make it easy to share your memories.

Send flowers to the Schramel family.