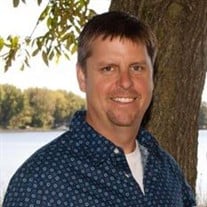 Chad Kraemer, 40 Cold Spring October 7, 1976 – July 2, 2017 Mass of Christian Burial will be at 11:00 a.m. on Friday, July 7, 2017 at St. Boniface Catholic Church in Cold Spring, MN for Chad Kraemer, age 40, who passed away from an accident at his home on Sunday. Burial will be in the parish cemetery. Friends and family may call after 4:00 p.m. Thursday July 6, 2017, and again from 9:00 a.m. to 10:45 a.m. on Friday July 7, 2017, at St Boniface Catholic Church. Chad was born on October 7, 1976 to James and Marjorie (Kaufman) Kraemer in St. Cloud, MN. He married Lynnae Leinen on March 28, 2003 in Hawaii and was a loving father and perfect role model for his children. He loved hunting with Bailey, wakesurfing with Creighton and goofing around with Andreigha, who is all around her “father’s daughter.” In 2007, Chad and his brother Jeff became the proud third generation owners of Kraemer Trucking and Excavating. He was on the Cold Spring Fire Department and Rescue Squad for 19 years. He was also actively involved in Firefest, alongside his wife Lynnae. He was a member of the Cold Spring Chamber and in 2015, he received the Hometown Pride Community Service Award. Chad always treated everyone with the same level of respect. He had a way of lighting up any room, but most of all Chad loved being at the lake and spending time with his family. Chad is survived by his loving wife Lynnae; children, Bailey and Creighton Frank, and Andreigha Kraemer; father, Jim (Sue) Kraemer; siblings, Kristi (Ryan) Monson, Kari (Jeremy) Robak, and Jeff (Wendy) Kraemer; in-laws, Irv and Kaye Leinen, Kelly (Kristi) Leinen, Nick (Laura) Leinen, and Kirsten (Jeff) Erbes; special friend, Kristie Hennen, and 11 nieces and nephews. Chad was preceded in death by his mother, Margie Kraemer; godmother, Trish Kaufman, and his grandparents, aunts, uncle and cousin.

The family of Chad Michael Kraemer created this Life Tributes page to make it easy to share your memories.

Send flowers to the Kraemer family.