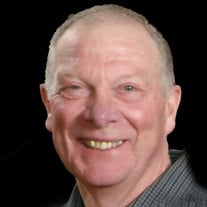 David “Ponch” Rausch, age 72 Richmond September 23, 1946 – June 7, 2019 Ponch Rausch died at the St. Cloud Hospital on June 7, 2019, surrounded by his loving family, due to injuries sustained in an accident on June 4, 2019. He was born on September 23, 1946 to Clarence and Alverna (Braegelmann) Rausch. He married Janet Lemke on September 19, 1970 at Sts. Peter and Paul Catholic Church, Richmond, MN. Ponch served in the U.S. Navy from 1965 to 1968. For most of his career, he worked in the grocery industry as a meat manager. In his retirement, he worked at the Richmond A&W and for the City of Richmond and City of Cold Spring. He had a passion for sports, especially baseball. He was a player and manager for the Richmond Royals and was inducted into the Minnesota Amateur Baseball Hall of Fame in 2016. He was an umpire, member and treasurer of the CMUA. He was a dedicated member of Sts. Peter and Paul Parish, the community of Richmond and ROCORI Schools. Ponch enjoyed traveling and attending his grandchildren’s activities, wood cutting with his son, the annual trip to Pinehurst Resort, gardening, and fishing. He is survived by his wife, Janet, and their children Jennifer, Jodi (Rick) Jude, Jason (Terrie), and Jessica (Duane) Krueger; grandchildren Hannah Bergner, Ava Trettel; Dylan, Taylor, and Rylee Jude and Brynlee Rausch; his siblings Tom (Deborah Grant), Robert (Diane), Mary (Dave) Huettl, and Jean (Frank) Kunze. He is preceded in death by his parents, Clarence and Alverna; in-laws, Bill and Lena Lemke; brothers-in-law, Donald Lemke and Florenz Vogt. Mass of Christian Burial will be 2:30 p.m., Wednesday, June 12, 2019 at Sts. Peter and Paul Catholic Church in Richmond. Burial will be in the parish cemetery. Relatives and friends may call from 4:00 p.m. – 8:00 p.m., Tuesday, June 11, 2019 at the Wenner Funeral Home in Richmond, MN. Visitation will continue from 12:00 – 1:45 p.m., Wednesday afternoon at the funeral home.

The family of David "Ponch" Rausch created this Life Tributes page to make it easy to share your memories.

Send flowers to the Rausch family.