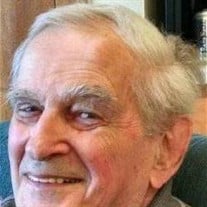 A memorial service with military honors will be held at 11:00 a.m., Thursday, July 12, 2018 at the Minnesota State Veterans Cemetery, Little Falls, MN for Edwin G. Fischer age 94, who died Sunday July 1, 2018 at Cherrywood Advanced Living with family by his side. Inurnment will be in the Minnesota State Veterans Cemetery. Arrangements are with Wenner Funeral Home, Cold Spring. Edwin was born in St. Cloud, MN to William and Margaret (Herzing) Fischer. Edwin graduated from Cathedral High School and Dunwoody College of Technology. He married Delores Ann Duren on May 2, 1945 in St. Luke’s Catholic Church in St. Paul, MN. He served in the US Army /Air Force during WWII as Top Turret Gunner and Flight Engineer on a B-17 Flying Fortress assigned to the 351st Bomb Group, 509 Squadron in Polebrook, England. Edwin lived in Cold Spring and was employed with the Cold Spring Granite Company for 41 years, 10 years as an electrician and the remainder as a mechanical draftsman in the engineering department. He was a member of the American Legion, VFW, and a lifetime member of the 351st Bomb Group Association. Edwin enjoyed hunting, fishing, sailing, gardening, aviation and building and flying remote control plane models. Survivors include his children, Sandra (Thomas) Wenner and their children, Barbara, Catherine, Michael and Beth, Rodney (Mari) Fischer and their children, Nicole and Paul, and Barbara (Jack) Brewer and their child, Damon; sister, Mary Ann Schwefel and 6 great-grandchildren. He was preceded in death by his wife, Delores Ann (Duren) Fischer on January 3, 2011, his brothers, Joseph, Henry and Donald and sister, Catherine Beckers.

The family of Edwin Fischer created this Life Tributes page to make it easy to share your memories.

A memorial service with military honors will be held at 11:00...

Send flowers to the Fischer family.