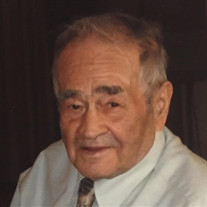 Mass of Christian Burial will be 11:00 a.m. on Monday, November 2, 2020 at St. Nicholas Catholic Church in St. Nicholas, MN for Elmer M. Lahr, age 93, who died Saturday at home surrounded by his family. Burial will be in the parish cemetery. Those attending must maintain social distancing and wear a mask. A visitation will be from 4:00 p.m. to 7:00 p.m. Sunday at the Wenner Funeral Home in Richmond. Elmer was born on June 16, 1927 in Luxemburg Township to Aloys and Rose (Witzman) Lahr. He married Florence Klein on June 11, 1956 in Holy Spirt Church in St. Cloud, MN. Elmer was a member of the St. Nicholas Parish, Men’s Society and the Knights of Columbus. Elmer spent nearly all his life farming; his early years with his parents on their farm, then once married the remaining years on his farm south of Cold Spring. Although farming is not an easy lifestyle, he had an incredible work ethic and the most amazing ability to confront each challenge head-on and without complaint. Many of his days began with polka music during morning milking, and the Rosary broadcast on KASM meant that his workday was drawing to a close. Elmer moved off the farm and into their retirement home in 2004, but he never really left the farm. He drove tractors for “the boys” until his body would no longer allow him, even then he would love to go to the farm to watch the work getting done. Later in life, his intense love of caring for the land and his animals was dedicated to caring for his massive garden at the farm. His hoe never got rusty even though the tiller was nearby in the shed. His ingenuity was evident as he picked raspberries with an ice cream pail tied around his neck with twine string so that he could keep both hands busy…one putting berries in the pail the other letting him take in God’s creation in the freshest manner possible. As was customary in his day, Elmer’s formal education ended with the eighth grade. So most of his knowledge was self-taught, having developed at a young age an incredible ability to understand and repair anything mechanical. German was the spoken language of his youth and he enjoyed telling stories of the teachers that abandoned their post in their one-room schoolhouse because of their inability to convince the students to speak English instead of the language they shared with family and neighbors. Big events that brought neighbors together often ended with the boisterous singing of traditional German songs. Over time he lost the members of his generation that spoke his version of German, but even in his final days he would connect when spoken to auf Deutsch when he wouldn’t in English. While farming was his occupation, his passion, and his legacy, his true love and focus was his family and his faith. Elmer enjoyed praying and going to Mass, fishing, and spending time on his beloved pontoon, because these always meant spending time with family and friends. He relished the chance to play Euchre, Solo or any card game with his family or the card groups that he cherished so much. Although he was a man of simple taste and modest expectation, life took Elmer on many trips with family, friends, and neighbors, and even a trip through Europe. But as much as any of these he treasured the annual trip to a cabin with all of his family over the Independence Day holiday. A week of fishing, card-playing, baseball, and cruising the waters on his pontoon with more than 70 family members would quickly erase the struggles of everyday life. A lifetime of selfless sacrifice was returned to Elmer in his final years as he gradually lost his battle with Parkinson’s. Despite encouragement from others to relocate Elmer to a facility that could more easily care for him, Flossy insisted that he would stay in their home no matter the measure of personal sacrifice it required of her. But then, Elmer was never one to choose a path that was easy, without exception he chose the path that was right. Right for his family, right for his friends, or even just right in principal. So with the aid of the most amazing hired caregivers, Florence and her devoted children made sure that the well-being of Elmer’s mind and body was a constant focus in his final years. Trips out of his home were a challenge for his caregivers, but his troupe of caregivers never let him miss special events, drives through the countryside, or even the 39th annual trip to the cabin in 2020. Elmer was best known for his humble, agreeable nature. He taught us that in life and in Euchre that anyone can play well with a good hand, but the key is to win when dealt an average hand. He is survived by his wife, Florence; children, Bonnie (Jeff) Meyer, Cindy (Rick) Midas, Diane (Brian) Swenson, Eileen (Joe) Kieffer, Joe (Cathy) Lahr, Janet (Ron) Midas, Larry (Jennifer) Lahr, Randy (Maria) Lahr; siblings, Delores VanHeel, Cecilia (Elmer) Hennen, Gerald (Delores) Lahr; 23 grandchildren; and 26 great-grandchildren. He is preceded in death by his parents; siblings, Ardella Lutgen Flaschenreim, Genevieve Binsfeld and 2 infant siblings.

Mass of Christian Burial will be 11:00 a.m. on Monday, November 2, 2020 at St. Nicholas Catholic Church in St. Nicholas, MN for Elmer M. Lahr, age 93, who died Saturday at home surrounded by his family. Burial will be in the parish cemetery.... View Obituary & Service Information

The family of Elmer M. Lahr created this Life Tributes page to make it easy to share your memories.

Send flowers to the Lahr family.