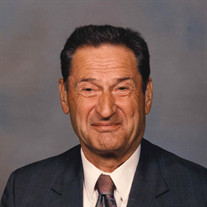 Mass of Christian Burial will be 11:00 a.m. Friday, March 18, 2016 at Sts. Peter & Paul Catholic Church in Richmond, MN for Elmer J. Worm, age 85, who died peacefully Thursday at the St. Cloud Hospital. Burial will be in the parish cemetery. Relatives and friends may call from 4:00 – 8:00 p.m. Thursday at the Wenner Funeral Home in Richmond. Parish Prayers will be at 4:00 p.m. The Catholic Order of Foresters and Knights of Columbus will pray a rosary at 8:00 p.m. Visitation will continue from 9:00 – 10:30 a.m. Friday morning at the funeral home. Elmer was born in Plummer, MN to William and Helena (Gerres) Worm. He married Joan Plantenberg on September 27, 1958 in Sts. Peter and Paul Catholic Church in Richmond. Originally deferred from the service for farm work, Elmer later served his country as a member of the US Army in the infantry. After working at the Richmond Mill and Cold Spring Brewery he ran his own business, Richmond Sand & Gravel (“the pit”) and operated it until it was sold in 1992. He was a long-time member of the Richmond Lions. Joan passed in 1992 and Elmer married Mary Lou Benedict in 1995. Elmer enjoyed everything outdoors and rarely could be kept inside. Elmer’s tall form was often seen walking the roads around Richmond when he wasn’t tending his lawn and gardens, or visiting his beloved “pit”. He had a kind soul paired with an up-beat attitude and believed, and said the best of, everyone. Survivors include his wife, Mary Lou Benedict; children, Mary (Robert) Haupert, their children and grandchildren, Richard (Emily), Steven, Thomas, and Aurora, Jody (Kevin) Beneke, their children, Erich and Kelly, Barbara (David) Heinen, their children, Bryce and Luke; step-children, Don (Jeanette Doty) Christensen, David (Linda) Christensen; step-grandchildren, Erick and Evan Christensen; 2-great-grandchildren; sister, Leona (Edward) Winczewski; sisters-in-law, Ruth Worm, Katie Worm, Irene Plantenberg; many nieces and nephews and his beloved dog, Lily. He was preceded in death by his wife, Joan (Plantenberg) Worm; son, William; parents; sister, Marie Herges; brothers, John “Jack” Worm, Joe Worm, Ray Worm, Math Worm, Tony Worm.

Mass of Christian Burial will be 11:00 a.m. Friday, March 18, 2016 at Sts. Peter & Paul Catholic Church in Richmond, MN for Elmer J. Worm, age 85, who died peacefully Thursday at the St. Cloud Hospital. Burial will be in the parish cemetery.... View Obituary & Service Information

The family of Elmer J. Worm created this Life Tributes page to make it easy to share your memories.

Send flowers to the Worm family.