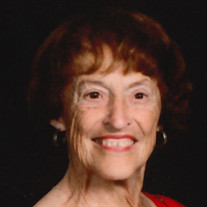 A memorial service will be at 3:00 p.m., Saturday, September 28, 2019 at Peace Lutheran Church in Cold Spring for Faith Pederson, age 81, who died September 17, 2019 at Regions Hospital in St. Paul, MN. A gathering of family and friends will begin at 1:30 p.m., September 28, 2019 at the church. Faith Lorene Pederson, beloved mother, wife, sister, aunt, grandmother, and friend, was born September 28, 1937, in Worthington, Minnesota, to Jay and Freda (Olstad) Seymour. She attended Albert Lea High School and the University of Minnesota, where she was a member of Clovia Sorority. Active in 4-H, she was crowned Queen of the Furrows for Minnesota in 1956. On June 28, 1959, Faith married Charles (Chuck) Kenneth Pederson in St. Paul. While living in the Twin Cities she worked as a service rep for Bell Telephone. After moving to Springfield, Faith taught high school home economics before becoming a full-time homemaker. In later years she returned to Springfield High as a substitute teacher. Faith and Chuck were active in numerous church and community organizations during their time in Springfield. Faith especially enjoyed singing in the St. John’s Lutheran Church choir. In 1990 Faith and Chuck retired and made their new home at Stalker Lake, near Battle Lake, Minnesota. They chose nearby Trefoldighed Lutheran Church as their place of worship and spent seven happy years at the lake as well as winters in South Padre Island before Chuck passed away in 1997. Faith relocated to Laguna Vista, Texas, in 2000 but continued to spend her summers in Minnesota. Faith was an avid reader and fitness walker who also loved fishing, boating, card playing, yoga, golfing, fine food, travel, and any and all family gatherings and celebrations. She was a beautiful, vibrant, joyful, and caring woman whose faith and trust in God was deep and abiding. Faith is survived by three children, Jay (Linda) Pederson of Richmond, Brent Pederson of St. Cloud, and Faye Sorensen of Woodbury; six grandchildren, Kyle (Mandi) of Minneapolis; Mark (Stephanie) of Burnsville; John of Minneapolis; Scott, Clare, and Nate; two great-grandchildren, Blaise and Declan; and two sisters, Marcia Paulson of Reno, NV, and Betty (Duane) Steele of Alden, MN. She was preceded in death by her parents; her husband of 37 years, Chuck; son-in-law Andy (Faye) Sorensen; and sister Marjorie Schilling. We are so blessed to have had her in our lives. She was truly an example of how to live, and how to love. She will be missed and remembered always. Memorials may be sent to Munsinger Clemens Botanical Society (http://munsingerclemens.com). Faith enjoyed strolling the Munsinger and Clemens Gardens during her summers in St. Cloud and spent many Sunday afternoons amidst the beautiful panorama of flowers, attending Music in the Gardens events with her son Brent.

A memorial service will be at 3:00 p.m., Saturday, September 28, 2019 at Peace Lutheran Church in Cold Spring for Faith Pederson, age 81, who died September 17, 2019 at Regions Hospital in St. Paul, MN. A gathering of family and friends will... View Obituary & Service Information

The family of Faith Lorene Pederson created this Life Tributes page to make it easy to share your memories.

Send flowers to the Pederson family.