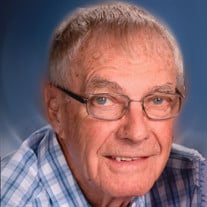 Mass of Christian Burial will be 1:30 p.m. on Wednesday, October 4, 2017 at St. Boniface Catholic Church in Cold Spring, MN for Frank Svihel age 87, who died Friday, September 29 at his home surrounded by his family. A gathering of family... View Obituary & Service Information

The family of Frank P. Svihel created this Life Tributes page to make it easy to share your memories.

Mass of Christian Burial will be 1:30 p.m. on Wednesday, October...

Send flowers to the Svihel family.