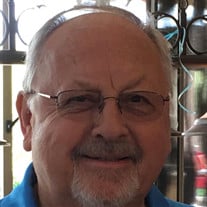 Mass of Christian Burial will be 11:00 a.m. on Saturday, March 13, 2021 at Sts. Peter & Paul Catholic Church in Richmond, MN for Gary B. Plantenberg age 77, who died Sunday, March 7, 2021 in Arizona. Entombment will be in the parish cemetery. Those attending the services must maintain social distancing and wear a mask. The mass will be live-streamed on the church’s website at www.christcatholic.com. The visitation will be from 9:00 – 10:45 a.m. Saturday morning in the church gathering space. Gary was born on May 14, 1943 in Richmond, MN to Leverne and Marie Plantenberg. He was a 4-sport athlete at St. Boniface High School in Cold Spring and graduated from St. John’s University in Minnesota. He married Irene Kalthoff on May 4, 1966 at St. Peter and Paul Catholic church in Richmond, MN. He moved to the Seattle area with Irene in the mid 60’s to begin his career, while also serving in the Army Reserves after college. He worked in the aerospace industry for many years in the Seattle area, as well as other high-tech companies. Because of his love of sports, he was the inaugural season president of the Seattle Seahawks Booster Club and 25-year season ticket holder. The family never missed a home game until his kids went away to college. He coached his kids in baseball, and later traveled as much as he could to watch his sons play high school, college, and professional sports. He and Irene moved to Phoenix, AZ from Seattle in 2000 and he eventually retired in 2007. He enjoyed attending spring training baseball games, spending time in the backyard pool, and traveling with Irene both domestically and overseas. His love of country music developed into a successful karaoke singing career, where he was known as “The Growler” throughout the Phoenix valley. He could frequently be seen around the area in his black cowboy hat performing in front of friends and soon to be friends. He enjoyed telling a good joke, enjoying a drink and a meal with friends and family, and watching his grandchildren grow up. He is survived by his wife Irene: children Scott (Monira) and Erik (Jennifer): siblings Mark (Diane) Plantenberg, Pat (Mary) Plantenberg, Kris Plantenberg, Lois (Allyn) Plantenberg, Dave (Laura) Vogt, Donna (Keith) Johnson, Janet (Dave) Hervin, Mary (Jim) Schramel, Terri (Larry) Moe: grandchildren Reese, Jayce, Brock, and Ashley.

Mass of Christian Burial will be 11:00 a.m. on Saturday, March 13, 2021 at Sts. Peter & Paul Catholic Church in Richmond, MN for Gary B. Plantenberg age 77, who died Sunday, March 7, 2021 in Arizona. Entombment will be in the parish cemetery.... View Obituary & Service Information

The family of Gary B. Plantenberg created this Life Tributes page to make it easy to share your memories.

Send flowers to the Plantenberg family.