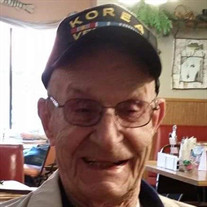 Mass of Christian Burial will be 1:30 p.m., Monday, December 23, 2019 at St. Boniface Catholic Church in Cold Spring, MN for Gilbert Brinker, 89, who died Thursday at Assumption Nursing Home. Burial will be in the parish cemetery. Relatives and friends may call from 4:00 p.m. – 8:00 p.m., Sunday, December 22, 2019 at the Wenner Funeral Home in Cold Spring. Visitation will continue Monday 11:30 a.m.-1:15 p.m. in the St. Boniface Church Narthex. Gilbert was born May 2, 1930 to John and Frances (Mackedanz) Brinker near Roscoe MN. He was the oldest of 11 children. He proudly served his country as a mechanic in the Army from 1951-1953. While stationed in England, he attended the parade after the coronation of Queen Elizabeth-a once in a lifetime opportunity. Gilbert married Esther Jungels May 10, 1955 in St. Nicholas, MN. They celebrated 61 years of marriage before her passing. Gilbert was a kind, simple, easy-going man. He was a mechanic most of his working years at Cold Spring Granite. After retirement, he worked at River Power Equipment with Fran Ramler. In his spare time, you could find him in his garage repairing lawnmowers, tillers, garden tractors-most anything with a motor. He probably fixed half the lawnmowers in the area. Gilbert loved going to the casino, a good solo or euchre game, playing cards with his kids, grandkids and great grandkids. He always had a smile and loved to goof around. His sense of humor was infectious. We have no doubt that he loved all of us. He is survived by his children, Linda (Don) Jacquemart, Lola (Dave) Vogel, Terry (Kim), Jesse (Patty), Jim, Bill (Gloria), Betty (Greg) Gruenes, Mary (Joe) Dvorak, Mark (Lisa), Amy Bertram (John Veeder); 30 grandchildren and 29 great grandchildren; siblings, Dick (Mary), Della Jungels, Art (Arlene), Joan Olmscheid, John (Gloria), Dennis, Doris (Jack) Torborg; in-laws, Rita Schwartz, Lorraine Jungels, Marvin and Linda Jungels, Alice Jungels, and Wally and Joyce Jungels He was preceded in death by wife, Esther; son, Tim; son in law, Steve Morey; siblings, Ron, Ruth Mueller, and Mary Jane; in-laws, Carl Mueller, Sylvester Olmscheid, Jerome Schwartz, Mildred and Norbert Hemmesch, Cletus and Shirley Jungels, Stanley Jungels, Patsy and Harold Jungels and Patsy Hoffstrom. Dad’s favorite clothes were flannel and jeans. Feel free to be casual for Dad at the wake and funeral.

Mass of Christian Burial will be 1:30 p.m., Monday, December 23, 2019 at St. Boniface Catholic Church in Cold Spring, MN for Gilbert Brinker, 89, who died Thursday at Assumption Nursing Home. Burial will be in the parish cemetery. Relatives... View Obituary & Service Information

The family of Gilbert B. Brinker created this Life Tributes page to make it easy to share your memories.

Send flowers to the Brinker family.