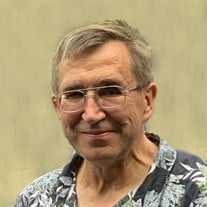 Gregory Martin Bechtold, 62, died on Easter Sunday night, April 12, 2020, on the Bechtold family farm in Rockville, Minnesota. He belonged to Mary of the Immaculate Conception Church in Rockville. He will be interred in the MN State Veterans Cemetery in Little Falls, MN, and a memorial service will be held at a later date when his whole family can attend. Gregory was born on June 25, 1957, in St. Cloud, Minnesota, to Jerry and LeMay Wagner Bechtold. He attended St. Boniface Grade School, Rocori Junior High, St. John's Prep School, and St. John's University. Later, he attended St. Cloud State University, where he earned a BS in Local and Urban Affairs. Gregory served in the Youth Conservation Corps for two years, planting trees in the north woods. He was a dedicated public servant who worked as an environmental specialist for Benton County for four years and for Stearns County for nearly 22 years, helping to steward the county land resources, especially wetlands and feedlots. Gregory grew up and lived on the family farm in Rockville except for the four years he served in the United States Air Force. He helped with the farm work in many ways over the years, running errands for the farm, caring for the calves, and spoiling his beloved dogs. He enjoyed reading, playing cribbage and 500, following high school sports, and cheering for the Minnesota Twins. He is survived by his mother LeMay, sisters Karen (Bernie Koltes), Brigid, Barbara (John Tomaro), Mary Ruth, and Joyce, his brothers Stephen (Helen), Mark, Roger, and Timothy (Karen Knudsen). He is survived by 19 nieces and nephews: Patrick, Brian, James, Shawn, Heidi, and Holly Koltes; Londi, Mark, Samuel, and Alicia Tomaro; Teresa, Thomas, Paul, and Joseph Bechtold; Shane, Cole, and Sage Christianson; and Stellan and Bente Bechtold. He was preceded in death by his father in 2013 and his brother Michael in 1973. He will be missed by his huge extended family, his loyal and wonderful friends and neighbors, and his long-time co-workers. Gregory felt deeply grateful for all the help and support from family and friends throughout his lifetime and especially from Bernie Koltes and Tony Generous during his last few years fighting cancer. When asked what he wanted his Legacy to be, Gregory said he simply wanted "to be remembered as a 'GOOD GUY,' that's all." He was so much more. Arrangements are with the Wenner Funeral Home, Cold Spring. "No flowers," Gregory said. Send your donations to your favorite charity.

Gregory Martin Bechtold, 62, died on Easter Sunday night, April 12, 2020, on the Bechtold family farm in Rockville, Minnesota. He belonged to Mary of the Immaculate Conception Church in Rockville. He will be interred in the MN State Veterans... View Obituary & Service Information

The family of Gregory Martin Bechtold created this Life Tributes page to make it easy to share your memories.

Send flowers to the Bechtold family.