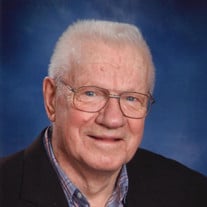 Herbert Alfred Buermann was born to John and Elizabeth (Blonigen) Buermann on January 4, 1930, in Richmond, MN. He grew up on the Buermann farmstead milking three cows every morning before school. After 8th grade he went off to work at other farms in the local area to make money for his family. He had 12 siblings, 7 brothers and 5 sisters. At the age of 24, he married Joanne Conrad on August 17, 1954. They celebrated 50 years of marriage in 2004 just before Joanne passed away on October 15, 2004. Herbert and Joanne were blessed with three beautiful children, Brendalee, Barbara and Thomas. They had 9 grandchildren and 19 great grandchildren. Dad worked for Swift & Company Meat Packing Plants for 30 years. He had the opportunity to live in many states, which included Minnesota, California, and Iowa. He returned to Minnesota where he built his forever home next to his family’s resort on Big Lake, outside of Richmond. Dad loved being back home near his family farm and resort. After retiring from Swift & Company he joined Richmond Bus Services and drove bus for 20 years. Dad would say he was known as the “Best Bus Driver,” and would want to be remembered that way. During the winter months, dad and mom enjoyed being snowbirds in Destin, FL. They spent 24 winters enjoying the beaches, playing cards with their friends, and watching sunsets. They built special friendships with the other snowbirds that lasted their whole life. Dad’s last six years were spent at Koronis Manor in Paynesville, MN. Dad enjoyed attending mass, bowling, fishing, camping, woodworking, darts, shuffleboard, horseshoes and playing cards; his favorites were Cribbage and Texas Hold’em. He was always there to lend a hand when anyone needed help and if you were lucky enough, you just might have heard him yodel. We want to remember our dad as a man of all traits. He was a hard worker and instilled in his children and grandchildren to work hard, be a good person and love the life you live. We will always remember all that he accomplished in his 91 years here on earth. Thank you, dad, for all your advice, wisdom, and stories! You were a great father and even better grandpa. We will all deeply miss you, but we are at peace knowing you are reunited with your bride, in Heaven, our mother Joanie. Heart to heart, friend to friend, God bless you ‘till we meet again.

Herbert Alfred Buermann was born to John and Elizabeth (Blonigen) Buermann on January 4, 1930, in Richmond, MN. He grew up on the Buermann farmstead milking three cows every morning before school. After 8th grade he went off to work at other... View Obituary & Service Information

The family of Herbert A. Buermann created this Life Tributes page to make it easy to share your memories.

Herbert Alfred Buermann was born to John and Elizabeth (Blonigen)...

Send flowers to the Buermann family.