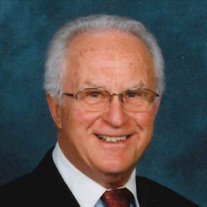 Ivan J. Arnold, 81, died peacefully surrounded by his wife and daughters at Assumption Home, Cold Spring, MN on December 18th, 2016, after a hard-fought battle with heart failure and lymphoma. Ivan was born on December 5th, 1935 in New Auburn, MN, the son of Emery and Cora Arnold and older sister June. Ivan grew up in Young America, MN and graduated from Central High School in Norwood, MN in 1953. In high school Ivan enjoyed playing baseball and hanging out with his buddies, who still remain some of his best friends today. Ivan lost his father when he was less than one year old and his mother Cora passed away when he was just 16. He had a very special relationship with his Grandmother Pauline Quast until her death at the age of 103. At the age of 20 Ivan joined the Army and was extremely proud to serve his country. Following boot camp in Oklahoma, Ivan was stationed in Iceland. Ivan continued to serve in the Army Reserves until his discharge in October, 1962. He was a true Patriot and a proud member of the American Legion. Following his discharge from the military, he moved to Minneapolis where he worked for the Honeywell Corporation. During this he met the love of his life, Patricia Basil. Ivan and Patty were married on September 25th, 1959 at the Waite Park Methodist Church. It was a magical night to remember! Ivan and Patty enjoyed 57 wonderful years of marriage. He enjoyed a career as a Tax Assessor for Carver County (which a highlight to his grandkids included assessing Prince’s Purple Palace!). Patty worked as the Post Master for the Young America/Norwood Post Offices. Both Ivan and Patty retired in in their late 50s and enjoyed a full, fun retirement. On November 15, 1962, their oldest daughter Elizabeth Faye (Libby) was born, a little curly haired toe head. Two and a half years later, along came their ginger, Nancy Lee on July 13, 1965. During those early years the Arnold family enjoyed living on the “ranch” in Young America with 5 horses, three dogs and miscellaneous other animals. Ivan enjoyed spending time riding horses with his family, taking his girls to horse shows, weekends at Pearl Lake and Little Cedar fishing, cutting wood to heat his home in the winter, snowmobiling and camping trips with friends and family and traveling with friends to Florida, Europe, Hawaii and California visiting his sister June’s family. Ivan was a very proud father and grandfather. His oldest daughter Libby, married Dave Bakken on October 8, 1988. They have two children Ally (21) and Matt (18). Ivan and Patty enjoyed many fun trips to sunny Venice, Florida to visit the kids. In 2004 The Bakken’s moved to Bismarck, ND. Ivan and Patty enjoyed many visits to “where the west begins” watching dance competitions, track meets and going to the Casino for “soup”, with Roger and Nissy Bakken. In August 19, 1995 Nancy married Paul Wolff. Nancy and Paul’s son Jacob (11), another little ginger, was born on December 9, 2005. Ivan and Patty enjoyed visiting the Wolff’s in Champlain, MN watching Jake play baseball and Tae Kwon Do and spending fun weekends fishing at the lake. Ivan also enjoyed evenings in the ski chalet watching Jake learn how to snowboard. He loved times with his grandchildren and supporting their activities and endeavors. Ivan was a fun-loving man, who had a strong Christian faith, which got him through many years of health struggles. He withstood more health challenges in one life than anyone person should have to face, but to his last breath, he fought to stay strong for his Patty and girls. Ivan is survived by his wife, Patty; daughter and son-in-law Libby and Dave Bakken; daughter and son-in-law Nancy and Paul Wolff; grandchildren: Ally Bakken, Matt, Bakken and Jacob Wolff; Sister June McCarthy; nephew Jeff McCarthy and family; niece Jan Dickson and family; Sister in-law Betty Bagley and niece Cathy Ore and family. Ivan was preceded in death by his parents Cora and Emery Arnold; Grandmother Pauline Quast; Brother-in-law John McCarthy; Sister in-law Donna Winter and many other friends and family that greeted him with open arms on December 18th at 9:15 a.m. Ivan will be sorely missed, his memory and passion for life will go on in our hearts forever. A visitation for family and friends will be held on Saturday, January 7th at 10:00 a.m, followed by a memorial service at 11:00 a.m. at Peace Lutheran Church at 1000 Red River Ave. North in Cold Spring, MN. A reception will follow at the church. Arrangements are with Wenner Funeral Home, Cold Spring.

The family of Ivan J. Arnold created this Life Tributes page to make it easy to share your memories.

Ivan J. Arnold, 81, died peacefully surrounded by his wife and...

Send flowers to the Arnold family.