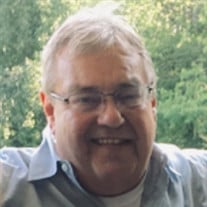 James Lee Gronewold was born August 14, 1953 and died February 4, 2019 (aged 65) at his home in St. Cloud, Minnesota. Jim was born and raised in south Minneapolis, a place he kept in his heart for a full lifetime. He joined the United States Air Force in 1971 and served in Thailand until 1975. He remained a loyal veteran of this country for the remainder of his years. Upon his return from the service, he lived for many years between Minnesota and Florida. He ultimately resided in St. Cloud, Minnesota, where he was close to family and worked for many years at the Coyote Moon Grille. Lover of the Minnesota Twins, parrots, and Matt's Bar, Jim lived a life according to his own principles. He made mistakes and owned them, and never, ever stopped trying. People who were close to him knew how stubborn he could be, and also how loving. He kept his childhood friends close, knew the best bait and tackle for fishing on the Sauk river, and religiously watched the Minnesota DNR eagle cam. He cooked a killer prime rib, but still enjoyed a bologna sandwich. Jim was a man who laughed with his whole upper body, whose left eye water ever time he ate a delicious meal with gusto, who told amazing stories of his decades in the service industry, and was fiercely loyal to the people and places he loved. Preceded in death by his beloved mother Marilyn Pietsch and father Emmett Gronewold, Jim leaves behind four brothers and sisters, Ed (Julie) Gronewold of Newfolden, MN, Linda Gronewold of Cold Spring, MN, Mike (Sherri) Gronewold of Baltimore, MD, and Vikki (Philip) Jones of Peyton, CO. He is loved and missed by many nieces and nephews and one grand-nephew. His absence has left an irreparable space in the family. A memorial service and internment will be held on 1:00 p.m., April 5, 2019 at the VA cemetery in Little Falls, Minnesota. Arrangements are with the Wenner Funeral Home, Cold Spring.

James Lee Gronewold was born August 14, 1953 and died February 4, 2019 (aged 65) at his home in St. Cloud, Minnesota. Jim was born and raised in south Minneapolis, a place he kept in his heart for a full lifetime. He joined the United States... View Obituary & Service Information

The family of James Lee Gronewold created this Life Tributes page to make it easy to share your memories.

Send flowers to the Gronewold family.