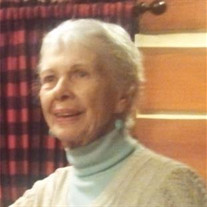 Jeanne R. Dean died on November 29, 2019 at her home in Cold Spring, with family by her side. Jeanne Roedell Dean was born on March 30, 1926 to Clare (Guggisberg) and Clarence Roedell in Minneapolis, MN. Her home on Logan Avenue South was defined two blocks away by farmland, where her mother would send her to get eggs from the farmer. Minnehaha Creek was nearby, as was a wonderful hill that was used for sledding as well as skiing on wooden skis. After graduating from college Jeanne worked at Dayton's in Minneapolis. She was part of their interior design training program and was promoted to the highest level in the program. She remembers that Mr. Dayton instructed them that the lower level was never to be called the "basement" but instead the "downstairs store". On September 15, 1951 Jeanne married Samuel Mairs Dean; both attended and graduated from the University of Minnesota. The day after they were married, they packed up their old Studebaker and drove to Mexico City where Sam had a job selling and building printing presses. Jeanne learned Spanish well, and much of this was due to her spirit of adventure She would go to the market and ask each vendor "what is this called?" She loved Mexico, with its bright colors, wonderful food and gracious people. Jeanne was known throughout her life for her spunky spirit, her timeless classiness, interior design skills as well as her superb entertaining and cooking of fine meals. She was known to host large parties with amazing grace as well as beautiful presentation. She had a good sense of humor, was open to others opinions and was a kind person. After living in Mexico and Venezuela, Sam and Jeanne returned to the United States. Jeanne worked as an interior designer in the Chicago area as well as in Westchester County NY. She was active in the community clinic in Ossining NY and loved being part of medical outreach. She was a member of PEO Chapter DT in St. Cloud as well as being a PEO in New York. Sam and Jeanne took on the challenge of restoring old homes. They restored two precolonial homes, one of which had been severely damaged by frozen pipes. They also restored a Victorian home that had been neglected as well as a converted barn. Every home they lived in, Jeanne brought charm and beauty to the place. Sam and Jeanne returned to Minnesota in 2006. Jeanne is survived by her children Samuel Dean Jr.(Janice) and Jennifer Dean Dwyer (Jim). Four grandchildren: Emeric (Amanda Ressler); Erin (Lane) Trisko, Lauren, John (Natalie Keane) and 5 great grandchildren. Preceded in death by her husband Samuel, two sons David (7 months) and Peter (4 months). Also preceded by many beloved dogs; Jeanne had a true affinity for all animals, and they brought her such joy. Many thanks to all who provided love and care to Jeanne, especially Jill and Sara from Home Instead, as well as Centra Care Home Care and Hospice staff who provided care with insight and integrity as well as human dignity and respect. A memorial gathering will be held on Sunday, December 15, 2019 at the Wenner Funeral Home, Cold Spring. Visitation at 2:00, service at 3:00, lunch to follow at Jeanne's home. All are welcome. No memorials are expected but if desired, would be appreciated to the Tri County Humane Society or the Cold Spring Library.

Jeanne R. Dean died on November 29, 2019 at her home in Cold Spring, with family by her side. Jeanne Roedell Dean was born on March 30, 1926 to Clare (Guggisberg) and Clarence Roedell in Minneapolis, MN. Her home on Logan Avenue South was defined... View Obituary & Service Information

The family of Jeanne R. Dean created this Life Tributes page to make it easy to share your memories.