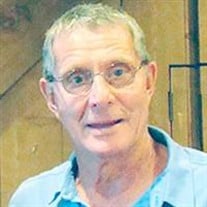 Jerome A. “Jerry” “Germs” Dold of Punta Gorda, Florida, (formerly Fridley, MN) passed away on Friday July 14, 2017 at the “young” age of 78 after fighting a courageous battle with a very aggressive form of Non-Hodgkin’s Lymphoma. He was born on July 30, 1938, and raised in Richmond, MN. Preceded in death by parents, Anthony “Tony” and Mary (Nett) Dold; brother, Arthur (Rosemary); sister, Mary Wolf Ludivig; brothers- in-law, Don Wolf, Dick Duret & Al Backes. Survived by his life companion, Mary Jo Garay; sons, Timothy (Liz), Thomas (Janet); daughter, Lisa; siblings, Donat Backes, Rita Duret (Mel Maglothin), Ann (Len), Guggenberger, James (Liola), Ervin (Marcy); brother-in-law, Bob Ludivig; grandchildren, Janene, Kailey, Isaac and Eli. Many nieces, nephews and other family members who he loved. Jerry grew up in Richmond MN, a town he loved and returned to whenever possible. After leaving Richmond he joined the U.S. Army and was stationed at Fort Campbell in Kentucky with the 101st Airborne Division where he was a paratrooper and completed 26 jumps (1956-1958). Soon after, he moved to the Twin Cities, and eventually lived for many years in Fridley, MN, where he was employed as a Meat Inspector with the USDA until he retired. After retirement, he enjoyed being a landlord, and the weekly upkeep and maintenance the yards required of him, but he really loved to take care of the bus stop in Fridley, on “his” corner. He stayed very active with daily walks and playing golf when possible with family and friends including his Tuesday men’s league. He loved to take ski trips to Colorado, Utah and Lake Tahoe with his family. Early on, he owned a boat and boat slip on the St. Croix at Sunnyside Marina in Stillwater, and enjoyed taking his family and friends cruising on the river. He often talked about the special bond he felt with all of his siblings and the closeness they all shared, with camping trips and social events throughout the years. His family was always very important to him. In recent years he spent winters in Punta Gorda FL, and summers in Hudson WI with his life companion “Lady Friend” Mary Jo who he loved dearly. Throughout his life he continued to stay fit, active, and considered himself young at heart. Jerry enjoyed happy hour and would bring his own pretzels and peanuts in a little baggie to enjoy with an ice-cold beer. He was a classy guy and always looked great in his Tommy Bahama clothing. He was a planner and a perfectionist as evidenced by the quality of any project he took on. Memorials preferred in lieu of flowers. On behalf of Jerome, his family plans to make a donation to the Mayo Clinic Healing Shawls. Visitation will be held from 10 a.m.-12 p.m., Saturday, July 22, 2017 at Sts. Peter & Paul Catholic Church in Richmond, MN prior to the funeral mass at noon on Saturday. Interment after Mass at Sts. Peter & Paul Parish Cemetery. Arrangements are with the Wenner Funeral Home, Richmond.

The family of Jerome Anthony "Jerry" Germs" Dold created this Life Tributes page to make it easy to share your memories.

Send flowers to the Dold family.