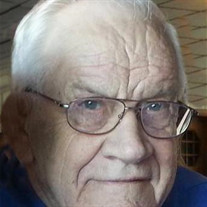 Mass of Christian Burial will be 10:30 a.m., Saturday, July 1, 2017 at St. Agnes Catholic Church in Roscoe, MN for John N. Buermann, age 86, who died Wednesday surrounded by his loving family at Koronis Manor in Paynesville. Burial will be in the parish cemetery. Relatives and friends may call from 4:00 p.m. to 8:00 p.m., Friday at the St. Agnes Catholic Church in Roscoe. Visitation will continue one hour prior to Mass Saturday morning at the church. Arrangements are with Wenner Funeral Home, Richmond. John was born in Richmond, MN to John and Elizabeth (Blonigen). He grew up on Big Lake near Richmond and attended school at the local country schoolhouse. His first jobs were as a mechanic and an electrician. He enjoyed tinkering and fixing and was known for being charitable and helpful with his skills. John started his own road maintenance company and serviced many townships until his retirement. He married Lorraine Catherine Hageman of Roscoe in 1958 and they were blessed with 6 children. John loved music, especially old-time music, playing concertina, and leading his “Buermann Family Band”. Music was his passion, and he dedicated his life to it since first starting to play at the age of 16. After 16 years of marriage to Lorraine he became widowed and was fortunate to connect with and marry his lifelong friend Elizabeth “Betty” Wolf of St. Joseph. They played music together and traveled frequently until Betty’s passing. John could fix anything, loved to socialize, was very spiritual, and will be remembered for his gift of music which he shared with the world. He was a member of Knights of Columbus, St. Agnes Church Choir, and Parish Board. Survivors include his children, LeAnn (Brad) Beck, John Jr. (Edith), William (Dorine), Alan (Lynn), Janelle (Landi) Bregu, Charlene (Jim) Provost; siblings, Roman, Herbert, Joe, Irma, Martha; 22 grandchildren and 10 great-grandchildren. He was preceded in death by his wife, Lorraine (Hageman); wife, Elizabeth “Betty” (Wolf); infant daughter, Mary; siblings, Martin, Edmond, Norbert, Robert, Alma, Eleanor and Rosalia. In lieu of flowers, the family prefers memorials that will be donated to charities in John’s honor.

Mass of Christian Burial will be 10:30 a.m., Saturday, July 1, 2017 at St. Agnes Catholic Church in Roscoe, MN for John N. Buermann, age 86, who died Wednesday surrounded by his loving family at Koronis Manor in Paynesville. Burial will be... View Obituary & Service Information

The family of John N. Buermann created this Life Tributes page to make it easy to share your memories.

Send flowers to the Buermann family.