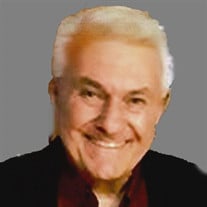 UPDATED SERVICE INFORMATION.....due to Covid-19 the Celebration of Life Service for John "Jack" DeSantis has been postponed for later this year. John “Jack” R. DeSantis passed away surrounded by family at his home in Cold Spring, Minnesota on January 1, 2020 at 6:20 PM, shortly after his much-loved Minnesota Gophers obtained success in winning the Outback Bowl. After a 7-month battle with lung cancer, he leaves behind a treasure full of friends and a loving family. Jack was born on April 22, 1936 to John and Dorothy (DeMura) DeSantis in Northeast Minneapolis. He grew up in a blended Italian and Slavic neighborhood with his sister Dolores Orr and many friends. When John was age ten, his mother died in a sanitarium from tuberculosis, a disease she obtained while working in the healthcare system. Two years later his father married Lorraine Carlson, which gifted him with two more brothers, Richard and Donald. In his youth, Jack excelled in sports, especially football, where his coach positioned him on the team as a linebacker and running back. He graduated from Columbia Heights High School in 1954 along with many friends whose friendship he maintained through life. Jack then served to protect the integrity of our democracy in the Air Force with an assignment as a military policeman in Tripoli, Libya. In 1963 Jack was awarded a Bachelor of Science degree in Education from St. Could State. He began his professional career in Eagle Mountain, California as a teacher and football coach, positions he also served in the communities of Truman, Minnesota (1964-1967) and Ellsworth, Wisconsin (1967-1975). In 1972 Jack completed a master’s degree at the University of Wisconsin River Falls. In 1975 he transitioned to a regional staff role with Education Minnesota. His posts included Southwestern Minnesota, Anoka-Hennepin District, Southeastern Minnesota, with his career finishing with statewide support of Minnesota Junior Colleges and Technical Schools. He was asked to stay on several years, eventually retiring at the age of 70 in 2006. He received acknowledgements for the quality of his contribution throughout his career, most recently being awarded a Lifetime Achievement Award in 2010. His career in education spanned 54 years. Throughout his life John was passionate about community and political involvement. His active participation and leadership in the Rotary Club, the Lions Club, his churches, and the Democratic-Farmer-Labor Party (DFL) enriched his life and that of others. He was gifted at planning events, organizing and hosting many charity golf tournaments and fundraising functions. His humanitarian service was most recently recognized by the International Lion’s club presenting him a Melvin Jones Fellow award. John was an excellent cook; many fond memories of his wonderful meals. John thoroughly enjoyed coaching football and would later transition to supporting the sport as a referee for over 25 years. He was a loyal supporter of the Minnesota Gophers and Vikings. Jack fell in love with Janet Hoppe whom he married in 1959, a union that lasted 33 years. They had 2 children, John and Jean. John’s second key love was Kathryn Pearce whom he married in 1995. John is stepfather to Rick & Michelle Pearce, Tracy & Bob Lewellyn, and Bill Pearce. He was gifted with four grandchildren Morgan, Sydney, Tristan, and Keanan. Throughout his life and his career John most enjoyed family and the many friendships he was blessed with; he absolutely loved people and always tried to highlight the best in everyone. John is survived by his children, grandchildren, siblings, nieces, nephews, former spouse, and many friends. He is preceded in death by his parents, many loved aunts and uncles, and his loving wife, Kathryn. A Celebration of Life will be held in the spring on Saturday, April 25, 2020 with visitation starting at 10 AM, service at 11 AM, and reception following at Peace Lutheran Church, 1000 Red River Avenue North, Cold Spring, Minnesota. In lieu of flowers, John wished support be guided to education through the ROCORI Dollars for Scholars program. Gifting can be signed to John R DeSantis and sent to Granite Community Bank, c/o John R DeSantis and Kathryn M Pearce Memorial Scholarship Fund, PO Box 416, Cold Spring, MN 56320.

UPDATED SERVICE INFORMATION.....due to Covid-19 the Celebration of Life Service for John "Jack" DeSantis has been postponed for later this year. John &#8220;Jack&#8221; R. DeSantis passed away surrounded by family at his home in Cold Spring,... View Obituary & Service Information

The family of John "Jack DeSantis created this Life Tributes page to make it easy to share your memories.

Send flowers to the DeSantis family.