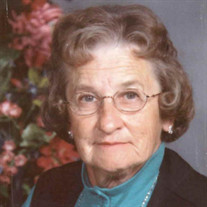 Mass of Christian Burial will be 11:00 a.m. Monday, February 29, 2016 at Sts. Peter & Paul Catholic Church in Richmond, MN for Kathleen M. Meyer, age 84, who died Tuesday at Country Manor in Sartell. Burial will be the MN State Veterans Cemetery Little Falls. Relatives and friends may call from 3:00 – 8:00 p.m. Sunday at the Wenner Funeral Home in Richmond. Parish Prayers will be at 7:30 p.m. Sunday evening. Visitation will continue from 9:00 – 10:30 a.m. Monday morning at the funeral home. Kathy was born on October 31, 1931 to William and Mary (Bronder) Janikula in Watertown, MN. She lived on the farm working the fields and milking cows. Kathy attended the country school until she went to high school at Watertown Minnesota graduating in 1950. She then boarded a bus went to Minneapolis and got a job at the IDS Tower and began working her career as a secretary. Kathy met Linus Meyer and they were married April 24, 1954 at Immaculate Conception Church in Watertown. The next year they started their family. After the first two kids Kathy and Linus purchased a house in Columbia Heights, MN. In 1964 they moved to Princeton, MN. There Kathy continued her life as a homemaker. When her children were all in school she started working at Fingerhut, sewing. Kathy then worked at Montgomery Ward’s Catalog Store in town. In 1979 they purchased a Resort in Richmond, MN, Oak Knoll on Hwy 22. Soon after Kathy started working at Target in St. Cloud. She retired from Target in 1997, enjoying retirement and grandchildren. Survivors include her children, Joan (Paul) Cole, Debra (Frank) Gertken, Scott Meyer, Terry (Nancy Johnson); 8 grandchildren, Jason, Nate, Vance, Ashley, Lyle, Rudy, Jeremey, Kelsey; 2 great-grandchildren, Skyla and Leah. She was preceded in death by her husband, Linus; parents; daughter-in-law, Nancie Meyer and sister, Bernice Mattson.

The family of Kathleen M Meyer created this Life Tributes page to make it easy to share your memories.

Send flowers to the Meyer family.