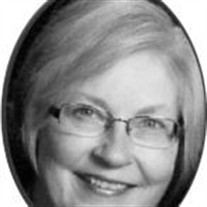 Kathryn M. Pearce passed away peacefully on July 29, 2017 after a yearlong battle with pancreatic cancer. She leaves a very loving family. Kathy, as she was affectionately known, was born on July 18, 1946 to Alvin and Eileen (Boor) Fosse in Wadena, MN. Her parents had a farm in Henning, MN, where she grew up along with her two siblings, Connie and Doug. She graduated from Henning High School in 1964. She was married to Edward Pearce from 1965 to 1991. They had 3 children: Richard (Rick), Theresa (Tracy), William (Bill). Kathy had many jobs while raising her children and then decided to go back to school. She started at Anoka-Ramsey Community College and transferred to the University of Minnesota where she completed her BS degree in Business Education in the fall of 1977. She took a teaching position in Business at Grace HS (now Totino-Grace) in 1978, was there for two years, then moved to the Anoka-Hennepin District for the 1980-81 school year. Kathy served as teacher, vocational coordinator, and technology supervisor in the Anoka-Hennepin District for 28 years. In the years she was vocational coordinator, she was responsible for helping design the STEP (Secondary Technical Education Program) Building. During her last year in Anoka-Hennepin, she was selected as one of the Twin Cities Technology Teachers of the year. During her years in Anoka-Hennepin, Kathy earned two further degrees; a Masters and a Specialist. During her teaching years, Kathy was an advocate for teachers. She served in the Anoka-Hennepin Education Association as President, Head Negotiator (4 times), Treasurer, and on the MEA Board of Directors. She was also involved in politics and ran for Coon Rapids City Council in 1979 and served in many capacities within the Democratic Party. In 1995 Kathy married John (Jack) DeSantis. She retired in 2008. Kathy and John owned a home on Diamond Lake in Dayton, Minnesota until 2011, at which time they moved to Cold Spring to enjoy more time with family. In retirement Kathy enjoyed her grandchildren and all of their activities. She also became an author of children’s books and was the family genealogist. Kathy is survived by; husband, John DeSantis, children, son Richard (Michele) Pearce, daughter Tracy (Bob) Lewellyn, son William Pearce; step children John DeSantis II, Jean DeSantis; grandchildren Morgan, Sydney, Tristan Lewellyn, Keanan Pearce; siblings Connie (Nic) Nicholson, Doug (Harriet) Fosse; many nieces and nephews, and former spouse Edward Pearce. She is preceded in death by her parents. A Celebration of Life will be held on Saturday, August 5, with visitation at 10 am, service at 11 am, and a reception following the service at Peace Lutheran Church in Cold Spring, located at 1000 Red River Ave N. In lieu of flowers, Memorials preferred to Rocori’s Dollars for Scholars in Kathryn M Pearce’s name at Granite Community Bank, %Kathryn M Pearce Memorial Scholarship Fund, PO Box 416, Cold Spring, MN 56320. Arrangements are with Wenner Funeral Home, Cold Spring.

Kathryn M. Pearce passed away peacefully on July 29, 2017 after a yearlong battle with pancreatic cancer. She leaves a very loving family. Kathy, as she was affectionately known, was born on July 18, 1946 to Alvin and Eileen (Boor) Fosse in... View Obituary & Service Information

The family of Kathryn M. (Fosse) Pearce created this Life Tributes page to make it easy to share your memories.

Send flowers to the Pearce family.