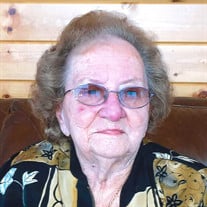 Leona Nies passed away quietly on February 4, 2017 while surrounded by family and friends in Assumption Home, Cold Spring, MN. Leona was born on December 21, 1930 to Christian and Mary Hoffman in Ashley, North Dakota. She grew up with her six brothers and sisters in Southern North Dakota on the family farm near Ashley. Leona met Harold Ervin Nies and were married on November 30, 1947. Leona and Harold farmed until 1971 and then sold the farm and moved to Tucson, AZ where they were both employed until 1991. They then retired and moved to Richmond, MN and fulfilled their lifelong dream and purchased a home on the Chain of Lakes. Harold passed away in 1995. Leona remarried Clarence Plummer in 2005 and was widowed for the 2nd time in 2008. She was always an active member in her church and sang in the choir for many years. Survivors include her daughter, Lily (Ronnie) Helfenstein; son, Michael (Lori) Nies; grandchildren, Matthew (Shelly) Helfenstein, Michael Helfenstein; great-grandson, Tyler Gephart; great-grandduaghtes, Madisyn, Victoria, Mikaela and Mariah Helfenstein; step-children, Karen Cobough, Kim McCusher, Kenny, Kevin, Kurt and Chris Plummer. She was preceded in death by her husbands, Harold (1995) and Clarence (2008); brothers and sisters, Ervin, Diana, Donald, Clarence, Ervin and LaVina. Leona’s family would like to express their deep appreciation to the staff at Assumption Home and Heartland Hospice both in Cold spring, MN for their loving attention and kindness shown to Leona in her final years and months. Leona’s family invites everyone who was lucky enough to know their humble, gracious and caring mother and grandmother to join them in celebrating her life at 11:00 a.m. on Wednesday, February 8 at Peace Lutheran Church in Cold Spring. Viewing will be from 10:00 a.m. – 11:00 a.m., Wednesday morning at the church. Burial will be Thursday, February 9th in the Ashley City Cemetery, Ashley, ND. Arrangements are with Wenner Funeral Home, Cold Spring, MN. In lieu of flowers friends and family are encouraged to send donations to their favorite charity.

Leona Nies passed away quietly on February 4, 2017 while surrounded by family and friends in Assumption Home, Cold Spring, MN. Leona was born on December 21, 1930 to Christian and Mary Hoffman in Ashley, North Dakota. She grew up with her... View Obituary & Service Information

The family of Leona Nies created this Life Tributes page to make it easy to share your memories.

Leona Nies passed away quietly on February 4, 2017 while surrounded...

Send flowers to the Nies family.