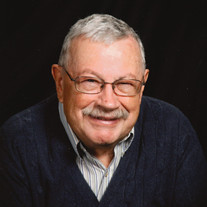 “Mine eyes have seen the glory of the coming of the Lord”. On Tuesday evening, April 27th, LeRoy Andrew Schommer went to sleep at home, and opened his eyes in the glory of the Lord. His eyes were once again clear, his mind sharp, and his body strong things he struggled with, especially during the last year. Lee was born in Watkins to Tony (Anton) & Anna. He was part of an ‘elite’ bunch—the “Watkins Boys”—guys who went to grade school and high school and left for the service together. Lee proudly served in the United States Air Force and was considered a Korean War Vet—although he actually was stationed in Michigan. Until Covid, Lee & Mary met with his Class of 1953 bunch monthly for lunch. Once they were all vaccinated this year, it was the first bunch Lee wanted to see—and so they met, a month before he died. In 1958, Lee married Mary Thielmann at St. Boniface Catholic Church in Cold Spring, Minnesota. Lee died two weeks short of their 63rd anniversary. Together with Mary, they raised four children, along with their bonus son, Glenn Rood, who, even though he had parents, spent so much time with the Schommer’s, he was always considered their own. After 38 years, Lee retired from Tension Envelope. Lee taught his daughter to fly, and the importance in flying, and in life, of “using the whole runway”. He was an avid coach sometimes and fan always for several baseball and hockey teams that his boys played on. He always had fun projects for his grandchildren on Thanksgiving weekends—making spider bread, building a gingerbread house (in the end, he hated it, and after the first, never built another one), and creating and painting wooden crafts. Lee was a talented craftsman with wood. In later years, scroll sawing and making bowls and pens on the lathe kept him busy. His collection of handmade clocks, including a grandfather clock done in black walnut, are both beautiful and impressive. Lee was a consummate collector—if one was good, several were better, “just in case”. His grandson referred to his garage as “Grandpa’s Hardware Store”. And finally, Lee was a patriot. You weren’t truly a Schommer, until you learned how to fold the big American flag he proudly flew. Lee and Mary were active members of St. Raphael’s Catholic Church in Crystal from 1959 until they retired to Horseshoe Lake. In 1996, they joined Sts. Peter and Paul Catholic Church in Richmond. Together, Lee and Mary served the parishes faithfully in many roles, wherever help was needed. Lee is survived by his loving wife, Mary; his children, Pat, Chuck & Kris, Jim & Theresa, and John. Nine grandchildren and their spouses loved him dearly—Katilee & Justin Haffner, Andrew & Kaitlin Behrendt, Lindsay & Jordan Brouillet, Kaela, Ryan, Kyle, Matthew, Brady, and Hallie; and three great-grandchildren—Murphy & Piper Haffner, and Kelyn Brouillet, due in mid-June. Also left to grieve him are his sister, Mary Hukriede, in-laws—Vaya & Vince Sturm, Noney Plantenberg, Marlene Plantenberg, Carrie & Archie Theisen, and Wally & Louise Thielmann, along with a host of nieces, nephews, cousins, and friends. Lee is predeceased by his parents; his son-in-law, Butch Behrendt; Godson, Tim Hukriede; and many in-laws. Per his wishes, Lee’s ashes will be buried in the Columbarium at the Minnesota State Veterans Cemetery, north of Little Falls, Minnesota. Glory, Hallelujah! Mass of Christian Burial will be 11:00 a.m. on Monday, May 3, 2021 at Sts. Peter & Paul Catholic Church in Richmond, MN. Visitation will be from 9:30 a.m. – 10:45 a.m. Monday morning in the church gathering space. Those attending the services must maintain social distancing and wear a mask. The service will be live-streamed on the church’s website at www.christcatholic.com.

&#8220;Mine eyes have seen the glory of the coming of the Lord&#8221;. On Tuesday evening, April 27th, LeRoy Andrew Schommer went to sleep at home, and opened his eyes in the glory of the Lord. His eyes were once again clear, his mind sharp,... View Obituary & Service Information

The family of LeRoy "Lee" Schommer created this Life Tributes page to make it easy to share your memories.

“Mine eyes have seen the glory of the coming of the Lord”. On...

Send flowers to the Schommer family.