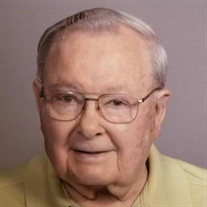 Mass of Christian Burial will be 11:00 a.m. on Saturday, January 22, 2022, at Sts. Peter & Paul Catholic Church in Richmond, MN for Linus Lawrence Guggenberger, age 95, who passed away on Sunday, January 16, 2022, at Asher Haus in Cold Spring. Fr. Cletus Connors will officiate. Burial will be in the St. Boniface Parish Cemetery. Visitation will be one hour prior to the Service on Saturday at the church. Wearing of masks will be requested. Linus was born on May 5, 1926, to George J. and Elizabeth (Hartig) Guggenberger, the eighth child of eleven, in rural Cold Spring. He attended school through 8th grade in rural Cold Spring and St. Boniface High School in Cold Spring, graduating with the class of 1944. Linus was a WWII veteran, serving in the U.S. Navy. After discharge from the military, Linus attended St. John’s University through the GI Bill, graduating in 1950 with a degree in Elementary Education. He spent several years teaching in elementary schools while spending summers pursuing his master’s degree in mathematics. He taught math to Junior High students in South St. Paul for the next 30 years, retiring at age 58. Linus’ hobbies were baseball, coaching basketball, golf, bowling, playing cards, and cribbage. After retiring from teaching, he moved back to Cold Spring where he became active at Rich-Spring Golf Course, and later at River Oaks Golf Course. Linus won many golf tournaments over the years. He was proud to have four holes-in-one. Linus was often found on the golf course searching for abandoned golf balls where he would clean and sort them for donation to area junior golf leagues. Linus was also a baker of pies, sharing them with his golfing buddies and family. Linus was a member of St. Boniface Parish, VFW, American Legion, Catholic Order of Foresters, and Knights of Columbus. Linus is survived by his wife, Dorothy Zumwalde, her four children, their spouses, and 11 grandchildren. He is also survived by his sister-in-law, Lu Guggenberger, 37 nieces and nephews, and many great-nieces and nephews. He is preceded in death by his parents, brothers and sisters, and their spouses: Medard (Loretta); Clara (Eddie) Steil; Claude (Clara); Sr. Marlene, O.S.B.; Josephine; Ray (Tillie); Leonilla “Mutz’ (Leo) Feneis; David; Herbert; George, Jr. (Dolores); three nephews and one great-niece.

Mass of Christian Burial will be 11:00 a.m. on Saturday, January 22, 2022, at Sts. Peter & Paul Catholic Church in Richmond, MN for Linus Lawrence Guggenberger, age 95, who passed away on Sunday, January 16, 2022, at Asher Haus in Cold Spring.... View Obituary & Service Information

The family of Linus Guggenberger created this Life Tributes page to make it easy to share your memories.

Send flowers to the Guggenberger family.