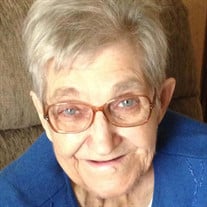 Our Mother’s hands were seldom idle. Mass of Christian Burial will be Tuesday, November 17, 2020 at 11:00 AM at St Boniface Catholic Church in Cold Spring, MN for Lois Katharine Forner, age 88, who died October 25, 2020 at Assumption Home in Cold Spring. Inurnment will be in the parish cemetery. Those attending the service must maintain social distancing and wear a mask. For those unable to attend the service, it will be live streamed at www.christcatholic.com. A visitation will begin around 9:30 AM in the church narthex. When she was born on February 17, 1932 in Cold Spring, MN, her parents, Joseph and Anna (Wolkerstorfer) Svihel, gave her the name Louise Katharine. However, when she was baptized a few days later, the priest misspoke her given name and from that moment onward she was called Lois. She spent her childhood and young adult years frolicking in Cold Spring. There, she met Raymond Forner, the love of her life, and the two of them ventured to San Francisco, CA where they were married on January 18, 1953. Soon after their marriage, they moved back to Minnesota, settling in the Rockville area where they raised their family in an old house along the Sauk River. Lois loved children and her career became one of being the best mother, grandmother and great grandmother she could possibly be. She was a phenomenal cook and baker as was especially experienced at Christmas time when she baked so many varieties of cookies that one easily lost count--her date balls being our favorite. She was a crafty woman who for over 40 years made sure that she made a Christmas ornament for every member of her family. What started out as just a few increased to close to 70 as her family expanded. She loved to knit and every Christmas, after spending an entire year knitting; mittens, scarves, socks, washcloths and all kinds of other great things, she would set her box of creations in the middle of the floor and thoroughly enjoy watching her family choose items made by her loving hands. Lois was active in her Catholic faith as was evident is her dedication to her Christian Mother’s group and her activism in right to life issues. In her later years, Lois, along with Ray, moved to northern Minnesota for several years where they fished the lakes to their heart’s content—she knew how to throw a proper fish fry! When fishing became more work than fun, Lois and Ray moved back to the Cold Spring area where they lived out their remaining years. Lois is survived by her children, John (Mary), Steve, Mike (Ann), David (Penny), Patty (Jeff) Knapek, Don (Lauren), Mary (Jim) O’Rourke, Rita (Peter) Schulte, Wendy (Dave) Skluzacek, Tim, and Amy (Ben) Thomas; 19 grandchildren, Laura (Cody) Page, Katie (Thomas) Nielson, Becki (Matt) Baker, Karlyn (Tim) Hambourger, Chad Forner (Amber Manders), Brittany (Jeff) Renier, Kayley (Parker) Foltz, Shiloh Forner, Benjamin O’Rourke, Daniel O’Rourke, Aaron (Breann) Schulte, Adam (Kayla) Schulte, David Schulte, Brian (Caitlin) Skluzacek, Tracy (Emi) Martin, Christopher (Mackenzie Tapp) Skluzacek, Nicholas Skluzacek, Ryan Thomas and Logan Thomas; 15 great grandchildren, Cody, Chevelle, Elias, Isabella, Hanna, Anika, Henry, Betsy, Meera, Ray, Lee, Avery, Stella, Lily and a great grandson due in November; her brother Lloyd Svihel; and her sister-in-law Adeline Svihel. She was preceded in death by her parents; her husband of 61 years, Ray; her sisters Margie Vouk and Irene Svihel; her brothers, Joseph Svihel and Frank Svihel; her brother-in-law John Vouk; and her sisters-in-law LuAnn Svihel-Fleischhacker and Ruthie Svihel. The family would like to thank Assumption Community and St Croix Hospice for their compassionate care of Lois.

Our Mother&#8217;s hands were seldom idle. Mass of Christian Burial will be Tuesday, November 17, 2020 at 11:00 AM at St Boniface Catholic Church in Cold Spring, MN for Lois Katharine Forner, age 88, who died October 25, 2020 at Assumption... View Obituary & Service Information

The family of Lois Katharine Forner created this Life Tributes page to make it easy to share your memories.

Our Mother’s hands were seldom idle.

Send flowers to the Forner family.