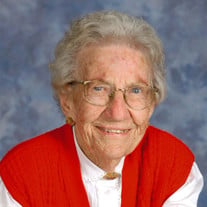 Mass of Christian Burial will be 10:30 a.m. on Monday, March 12, 2018 at St. Boniface Catholic Church in Cold Spring, MN for Louise “Mickey” Rausch age 100, who died Thursday, March 8, at Assumption Nursing Home in Cold Spring. Entombment will be in the parish cemetery. A visitation will begin at 9:00 a.m. Monday morning in the Church Narthex. Louise Meinz Rausch, whose family roots reach back well over a century in the area, died March 8, 2018 in the Assumption hospice after a brief illness. She was 100. Known from childhood as “Mickey” to nearly all in the community, she was born in Rockville on Aug. 23, 1917, the second youngest of Henry and Rosina Meinz’s seven children. Mickey’s life was especially marked by devotion to her family, her faith and her community. In 1945, at the age of 28, she married Alvis “Allie” Rausch. Her husband worked at the Cold Spring Granite Co. for 48 years, died in 2003 at 97. Mickey’s survivors include her four children: Susan Rausch Jorgenson, of Denver; Timothy Rausch (Kay), of Salt Lake City; and Andrew and John Rausch (Lois), both of whom live in Cold Spring. Until mid-February, Mickey Rausch, with the loving care of Julie Ficker, was able to remain in her home on South 3rd Street in Cold Spring, a dream house that she and Allie had built in the 1950s after spotting the design in Better Homes & Gardens. Mickey mowed the grass and shoveled snow there until she was well into her nineties. Mickey Rausch played piano and ukulele, was an expert seamstress, and in the frugal tradition of her generation even made her own laundry detergent after starting her family. She would collect leftover animal fat from the pancake and sausage breakfasts around town, render it, add lye and end up with thick cakes of soap from which she would shave the flakes into the ringer washing machine. She adhered to a strict routine: Monday was wash day, Tuesday for ironing, Friday for cleaning and Saturday for baking – bread, cinnamon rolls, cookies, a cake and two pies to last the week. She lived a simple life, loved every day and supported her family at every stage of their lives. Mickey was a longtime member of St. Boniface Parish, attending mass and saying the Rosary daily for many decades. When she turned 85, she relished the perk of no longer having to cut the pies at the church’s fall festival. Growing up in Rockville in a house along the Sauk River, Mickey primarily spoke German in the Meinz home until she was enrolled in grade school, a common occurrence among many area families at the time. She retained her fluency in German throughout her life. Mickey told stories about how her father was one of the first to get electricity for the home, but also how he was too frugal to turn it on. To keep food cold in winter, the family would haul it by rope to the roof of the house. Susan recalled her mother’s stories about the terror she felt as a child when St. Nicholas, in the German tradition, would visit the house before Christmas – at times ominously with a whip – to inquire whether the children were behaving, before he dispensed the holiday sweets. Mickey carried on the frightening tradition of St. Nick visits, minus the whip, when she had her own family. After graduating from high school in the 1930s, Mickey worked as a maid and cook for a wealthy family in St. Paul. Later, a spirit of adventure prompted her to take the train to California where she worked as a waitress and cabin maid for a time at a lodge in Yosemite National Park. She and other young lodge workers enjoyed hiking, fishing and horseback riding in the park when they were off work. During World War II, she joined one of her brothers who lived in Cleveland, where she worked at a factory that made nuts and bolts for airplane production. She married Allie Rausch in 1945; it was one of five marriages between the Meinz and Rausch families from Rockville. Allie and Mickey’s marriage was traditional, in the style of the era. While her husband pursued his career with Cold Spring Granite – and the hobbies of golf, bowling and hunting -- Mickey took care of everything else. She sewed the children’s clothes, avidly kept a garden and canned its bounty, attended her kids’ school events and was the family’s disciplinarian and money manager. Allie was on hunting trips when one of his children was born, but there is no evidence that Mickey admonished her husband for not having his priorities in order. Rather, she made fine meals with the ducks, pheasants and other game he brought back from his excursions. The couple enjoyed dancing together to big band tunes and while Allie sang with the area Maennerchor, or German men’s choir, Mickey harmonized with the Sweet Adelines. She too took up bowling and golf. After she was married, Mickey lived continuously in Cold Spring for more than 70 years, except for two brief family moves out of state when her husband took assignments for the granite company at operations it had in Texas and California. After turning 100 last August, she remained in good physical health until she had a spontaneous cranial bleed in February. Doctors in St. Cloud found no obvious cause of the hematoma and she returned to Cold Spring one final time, taking up residency in the Assumption home and hospice until her death. In addition to her children, Mickey Rausch is survived by 12 grandchildren and 17 great-grandchildren. She was preceded in death by her six siblings, Erma, Joseph, Martha, Edith, Julius and William.

The family of Louise Ann Rausch "Mickey" created this Life Tributes page to make it easy to share your memories.