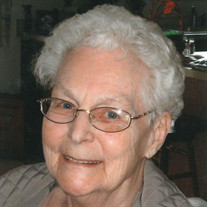 Marilyn Ann Sietsema, 90, Watkins, passed away Saturday, September 10, 2016 at Hilltop Health Care Center in Watkins, MN. A memorial service will be 5:00 p.m., Wednesday, September 14 at Kimball United Methodist Church in Kimball, MN. Visitation will be at the church one hour prior to the service. Inurnment will be at a later date at the Milford Cemetery in Milford, IA. Marilyn was born December 29, 1925 in Montgomery, IA to Edward and Hannah (Anderson) Hamilton. She grew up in the Milford area and graduated from Milford High School in 1943. On January 8, 1944, Marilyn was united in marriage to Harold R. Sietsema and blessed with three children. Although being a mom was her top priority, she also worked several years as a secretary at the High School in Worthington, MN and also for two different insurance agencies. For the past 6 years, she has been a resident at Hilltop Heath Care Center in Watkins, suffering from dementia. She loved to sing and play piano; she also loved to fish, play cards, and do crossword and jigsaw puzzles. Marilyn is survived by her husband of 72 years, Harold Sietsema, Watkins, MN; children, Suzanne (Bob) Lindbloom of Richmond, MN, Rodney (Joy) Sietsema of Lindstrom, MN; grandchildren, Jeff (Sara) Lindbloom, Brian Lindbloom, Ana (Mark) Hulzebos, and Glade Sietsema; great-grandchildren, Abby Lindbloom, Kaja and Liara Hulzebos, and Blake and Grant Tylutki. She was preceded in death by her parents; brother, Marvin Hamilton; and her son, Terry Ray Sietsema. The family would especially like to thank the entire staff at Hilltop Health Care Center for the wonderful and loving care given to Marilyn. Arrangements were entrusted to the Wenner Funeral Home, Cold Spring.

The family of Marilyn Ann Sietsema created this Life Tributes page to make it easy to share your memories.

Send flowers to the Sietsema family.