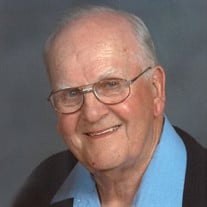 Martin Dietrich, passed away quietly while surrounded by family, sitting in his favorite chair in Assumption Home in Cold Spring, MN on October ninth, 2016. Martin was born on November 8th, 1928 to Jacob and Selma Dietrich in Zeeland, North Dakota. He grew up with his eleven brothers and sisters in Western South Dakota on the family homesteaded farm near McLaughlin. Like many boys of that time, he left his one-room schoolhouse after the 8th grade to help on the farm. One thing led to another and that led him to Aberdeen, South Dakota where he met and married Roberta “Bobbie” Cochrane in August of 1955. About that one thing leading to another… Martin did many things during his rich and full lifetime. After leaving the family farm, Martin did a little gold-mining in the black hills, became a cattle rancher with his brother Marvin, and then took to the rodeo. He was riding in Chicago when a particularly ornery bull side-tracked his rodeo career. Then Uncle Sam called and he served as a radio operator in Korea, receiving a bronze star for his service during combat. After returning from Korea, he resumed his education and finished his bachelor’s and master’s degrees at Northern State college in Aberdeen, South Dakota. He served as superintendent of schools in Gettysburg, South Dakota and then moved into banking, serving as Vice President in Gettysburg, and President of banks in both Paynesville, Minnesota and Greenfield, Iowa. Martin was an active member of every community in which he lived including the Lions Club, the Lutheran Church, the Chamber of Commerce, foster parenting, and the Golf course, to name a few. Martin is survived by his daughter TyLynn Theis (Steve); son Doug (Rachel); grandchildren Adam Theis (Liz), Matt Theis, Danna Theis, Rebeca Dietrich-Fine (Joe), John Dietrich, and Jake Dietrich; great-grandson “Robbie” Theis; siblings Harold Dietrich (Chun Ok), Leslie Dietrich, Delaine Maxon (Mel), Elwood Dietrich, Kenneth Dietrich; foster children Nancy Daniels, Lynn Chantler, Tammy Jackels, Kevin Langager, and Jake Rantanan. Martin was preceded in death by his Wife Roberta; siblings Edwin Dietrich, Aurelia Dietrich, Lucy Kamletz, Lorraine Hendrix, Marvin Dietrich, and Elmer Dietrich. Martin’s family would like to express their deep appreciation to the staff at Assumption Home and Heartland Hospice, both in Cold Spring, MN for their loving attention and kindness shown both to Martin and Bobbie in their final years and moments. Martin’s family invites everyone who was lucky enough to know their humble, gracious, and caring father and grandfather to join them in celebrating his life at a viewing to be held at Wenner Funeral Home in Cold Spring, MN on Wednesday, October 12th from 5:00 pm to 7:00 pm and one hour prior to the service at the church. A funeral service will be held at Peace Lutheran Church, in Cold Spring on Thursday, October 13th at 11:00 followed by a reception at noon. In lieu of flowers, friends and family are encouraged to send donations to the Dakota Boy’s & Girl’s Ranch or another charity of choice.

Martin Dietrich, passed away quietly while surrounded by family, sitting in his favorite chair in Assumption Home in Cold Spring, MN on October ninth, 2016. Martin was born on November 8th, 1928 to Jacob and Selma Dietrich in Zeeland, North... View Obituary & Service Information

The family of Martin Dietrich created this Life Tributes page to make it easy to share your memories.

Martin Dietrich, passed away quietly while surrounded by family,...

Send flowers to the Dietrich family.