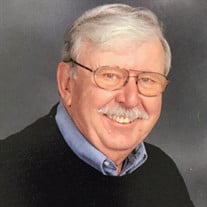 Michael Pierre Fandel, born October 9, 1933, passed away August 18, 2017, surrounded by loved ones. The son of Victor and Margaret Irene Fandel, Michael was beloved by his family, church, and many communities. A proud St. Cloud native, he was raised in the Benedictine tradition in Catholic schools, including his attendance at St. John’s University. He then served in the U.S. Navy from 1951 to 1954 before meeting the light and love of his life, Nancy Coborn, who he married on September 2, 1957. Michael and Nancy built their home in St. Cloud, where Michael’s indomitable determination, positive spirit and work ethic saw them through raising seven children, several business endeavors, and more than their share of blessings. Michael, or “Papa” as he was known to his twenty grandchildren, truly lived for his family. He was a natural leader and was avidly involved in many community organizations, including his time as member and President of the Sertoma Club, membership in the Sauk Rapids and Cold Spring V.F.W., American Legion, membership in the Cold Spring Area Maennerchor, and his many years on the Board of Directors and President of the Minnesota Fabricare Institute. Michael was known for his wonderful sense of humor, and his devotion to faith, family, love and music. Those around him respected his strong Christian values and tremendous resilience in handling life's challenges and opportunities. Michael is preceded in death by his parents and 12 brothers and sisters. He is survived by his wife Nancy, his two remaining sisters - Mary Lou Clote (Oklahoma) and Carol Francis (Maryland), seven children - Denise (Joyce), Cheryl (Kurt) Carlson, Rochelle (Jeff) Blease, Michael D. (Cindy), Monique (David) Rupp, Janien, and Neil (Kelly), along with his treasured grandchildren. He will be dearly and profoundly missed, but his love, service, and bottomless faith will live on through his children, grandchildren, and beloved wife. A Visitation will be from 4:00-8:00 p.m. Tuesday, August 22, 2017 at John the Baptist Parish Center on Fruit Farm road in Collegeville, Minnesota. Mass of Ressurection will be at 10:00 a.m. Wednesday, August 23, 2017 at St. John’s Abbey Church with a visitation from 8:45-9:45 a.m. in the Baptistry. In lieu of flowers, the family asks that anyone interested make contributions to the St. John’s Boy’s Choir with the memo: Fandel Family Scholarship Fund.

Michael Pierre Fandel, born October 9, 1933, passed away August 18, 2017, surrounded by loved ones. The son of Victor and Margaret Irene Fandel, Michael was beloved by his family, church, and many communities. A proud St. Cloud native, he was... View Obituary & Service Information

The family of Michael Pierre Fandel created this Life Tributes page to make it easy to share your memories.

Send flowers to the Fandel family.