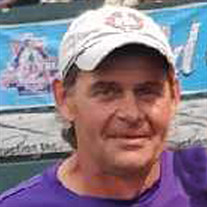 Michael G. Schleper, age 59 Farming May 31, 1959 – September 20, 2018 Mass of Christian Burial will be 11:00 a.m. Wednesday, September 26, 2018 at St. Catherine’s Oratory in Farming, MN for Michael G. Schleper age 59, who died Thursday at the St. Cloud hospital. Relatives and friends may call from 4:00 p.m. – 8:00 p.m., Tuesday, September 25, 2018 at the Wenner Funeral Home in Richmond. Visitation will continue from 9:00 – 10:00 a.m. Wednesday morning at the funeral home. Mike was born in Richmond, MN to Elmer and Marcelline (Weidner) Schleper. He graduated from Albany High School in 1977. Mike married Assia Krougova on September 29, 2001 in the St. Catherine’s Catholic Church in Farming, MN. He was a dairy farmer for 45 years and was the third generation to farm on their family’s century farm. Mike also worked for Prostaff / Wells Concrete. He was a member of St. Catherine’s Catholic Church until it closed and was the president of the Farming Baseball Association. Mike loved baseball. He played for and coached the Farming Flames for 20 years and was inducted into the Farming Baseball Hall of Fame in 2015. He spearheaded getting lights for the Schleper Brothers Baseball Field which was dedicated to his dad and uncles. It was said that Mike was a great competitor and an even greater ambassador of baseball. Mike was a hard worker and seldom took time off from the farm except to watch Robert and extended family play hockey and baseball. He was quick-witted and loved to make people laugh. Mike also enjoyed riding his Harley Davidson, but most of all he loved his family and his time with them. Survivors include his wife, Assia; son, Robert; stepson, Sergei (Keanan) Krougov; grandchildren, Marshall and Chloe; siblings, Ramona (Jim) Myott, Ann (Ron) Jonas, Janice (Don) Lokken, Tracy Gillespie, Pat (Bruce) Bechtold, Steve (Barb) Schleper, Beverly Schleper, Suzanne (Bret) Rusk, Peter (Heide) Schleper, and Jacki (Tom) Humphrey He was preceded in death by his parents, Elmer and Marcelline and brother-in-law, Bob Gillespie.

The family of Michael G. Schleper created this Life Tributes page to make it easy to share your memories.

Send flowers to the Schleper family.