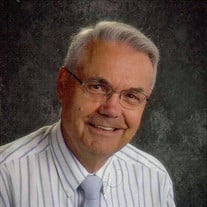 Peter H. Froehle, age 84, of St. Cloud, MN, passed away on January 3, 2022, while surrounded by loved ones, following an extended and courageous battle with Parkinson’s Disease. Peter was the eldest of eleven children, born on May 7, 1937, to Harold and Violet (Ehresmann) Froehle of Melrose, MN, and later of Thief River Falls, MN. In high school Peter excelled at sports, particularly football and track, making it to the State meet as a shot putter; and declining a football scholarship at North Dakota State to attend St. John’s University. At St. John’s Peter continued his track and football career until he experienced a career ending knee injury his sophomore year. Peter graduated from St. John’s University in 1959 with double majors in Physics and Mathematics. More importantly, while at St. John’s Peter met his wife of 61 years, Caroline Pfeffer, who was attending The College of St. Benedict. The two were married February 27,1960 and had three children: Stephanie, Stephen, and Susan. Peter began student teaching at St. John’s Preparatory School in Collegeville, MN (SJP) in 1959 and continued as a teacher and coach at SJP for 52 years until he retired in 2011. While at SJP Peter coached Football, Wrestling, Track, and he started a Nordic Ski team. During Peter’s 23 years coaching Football, SJP secured five Don Bosco Conference Football Championships. During Peter’s 42 years coaching Track, SJP secured seven Don Bosco Conference Championships, and in 1970 Peter coached SJP to the Minnesota Catholic Schools State Track Championship! In addition to teaching Physics, over the years Peter taught almost every level of high school Math and was a Driver’s Education instructor. He published regularly in The Physics Teacher, Physics Today, and participated in 14 separate fellowships with the likes of: 3M, US Dept. of Energy, National Science Foundation, Minnesota Higher Education Fellowship, Corning Company Fellowship, Woodrow Wilson Fellowship. A fond highlight was co-directing SJP’s NASA Project from 1995-2003 during which SJP students developed seven experiments, one of which launched on Space Shuttle Discovery on August 10, 2001! Peter’s list of awards and acknowledgements is long and includes: several times being named to the Who’s Who Among America’s Teachers and Educators; a number of regional and national excellence in teaching awards; 1988 Central Minnesota Conference Athletic Coach of the Year; and in 1995 Peter received the Armor of Light Award from SJP for his exceptional service and commitment to the school. Peter enjoyed bringing Physics and Math to life for students: conducting experiments in front of the school; shooting rockets off to prove a theory; and showing students that special spot in Stearns County where cars actually roll up hill. Peter was a hard-working, kind, and generous man. Peter was also an avid family man, and he enjoyed: family camping trips, family card games, regular penny ante poker games with friends, chess, arm wrestling competitions, bicycling, cross- country skiing, canoeing, the outdoors, woodworking, a love of chocolate (Hershey bars and Caroline’s chocolate chip cookies were his favorites); and the times that Caroline and he spent with their children and grandchildren. Peter lived by a thoughtful philosophy and definition of success, and his life was abundant in such success. Success: To laugh and love much To win the respect of intelligent persons and the affection of children To earn the approval of honest critics and endure the betrayal of false friends To appreciate beauty To find the best in others To give of oneself without the slightest thought of return To know that even one life has breathed easier because you have lived Peter is survived by his wife, Caroline; children, Stephanie (Ron), Stephen (Liz), Susan; siblings, Tom, Ken, Bill, David, Mike, Bernadette, John; grandchildren, Ronald, Joseph, Kristina, Jonathon, Katy, Tracy, Meghan, and William. He was preceded in death by his parents; siblings, Harry, Mark, Mary Jo; and grandchild, James Peter. Visitation will take place at Wenner Funeral Home in Cold Spring on Sunday, January 9 from 2:00- 4:00 PM. Due to COVID, surgical masks will be required, and social distancing observed. On Monday January 10 at 2:00 PM a private service will be held at the Wenner Funeral Home in Cold Spring for the immediate family, and the service will be live streamed via https://my.gather.app/remember/peter-h-froehle. A private interment will follow. Entries may be made in the virtual Guest Book at www.wennerfuneralhome.com. Memorials to family are preferred in lieu of gifts or flowers.

Peter H. Froehle, age 84, of St. Cloud, MN, passed away on January 3, 2022, while surrounded by loved ones, following an extended and courageous battle with Parkinson&#8217;s Disease. Peter was the eldest of eleven children, born on May 7, 1937,... View Obituary & Service Information

The family of Peter H. Froehle created this Life Tributes page to make it easy to share your memories.