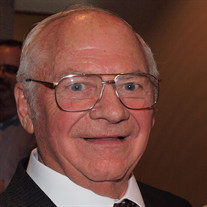 Mass of Christian Burial will be 1:30 p.m. on Tuesday, April 16, 2019 at St. Boniface Catholic Church in Cold Spring, MN for Raymond “Ray” Leo Schwegel age 82, who died Tuesday, at the St. Cloud VA Medical Center surrounded by family. Inurnment will be in the parish cemetery. A gathering of family and friends will be from 11:00 a.m. – 1:15 p.m. on Tuesday morning in the St. Boniface Church Narthex. Arrangements are with Wenner Funeral Home, Cold Spring. Ray was born on August 19, 1936 in St. Joseph, MN to William and Ida (Gillitzer) Schwegel. He grew up on a farm and enlisted in the U.S. Army in November 1955 at the age of 17. He was stationed in Okinawa, Japan. In the Army, Ray expanded his knowledge and worked as a mechanic and machinist. After his enlistment, Ray purchased a dairy farm and worked as a machinist at DeZURIK. He married Betty Lou Stanley in 1960 and they were blessed with 5 children. In 1978, Ray moved the family to California and worked for Raymond Granite Company, a subsidy of Cold Spring Granite. After his time at the granite company, Ray and Betty started their own ceramic shop where they worked together up until Betty’s death in 1997. Ray retired in 2005 and moved back to the Cold Spring, MN area; there he met Ardelle, Bueckers-Kowski in 2007. He and Ardelle were married in 2009; together they enjoyed dancing, playing cards and socializing. Ray was orderly, charismatic and had a great sense of humor. He enjoyed restoring antique tractors and mowing lawns. Ray was an approachable person who could talk to anyone. Ray was a family man who worked hard to put family above all else. He is survived by his wife, Ardelle; children, Kevin Schwegel, Kimberly Nolen, Kerri (Greg Pickard) Schwegel, Kristopher Schwegel, Karmen (Mike Skuza) Schwegel; grandchildren, Travis, Joshua, Kyle, Courtney; great-grandchild, Troy; siblings, Ida Mae Johnson, Alvina “Winnie” Pfannenstein and Delbert Schwegel. He was preceded in death by his previous wife, Betty Lou; siblings, Andrew Schwegel, Edward Schwegel, Wilfred “Fritz” Schwegel, Rose Hooe, Eleanore “Polly” Schulte, Cathrine Litz and Ronald “Bingo” Schwegel. Memorials are preferred to St. Jude Children’s Hospital or the Kidney Foundation; https://www.stjude.org, http://www.kidneyfund.org

The family of Raymond "Ray" Leo Schwegel created this Life Tributes page to make it easy to share your memories.

Send flowers to the Schwegel family.