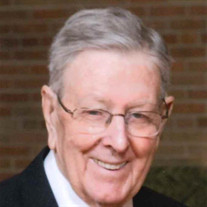 Mass of Christian Burial will be 10:00 a.m. on Saturday, April 21, 2018 at St. Boniface Catholic Church in Cold Spring, MN for Richard B. Hageman age 91, who died peacefully on Wednesday, April 18, at Quiet Oaks Hospice House, St. Augusta, MN surrounded by his family. Burial with full military honors will be in the MN State Veterans Cemetery, Little Falls, MN. A gathering of family and friends will be 8:30 – 9:45 a.m. Saturday morning in the St. Boniface Church Narthex. Dick was born on December 11, 1926 in St. Paul, MN. He was the third of four children of Charles and Louise (Klapperich) Hageman. Dick was a proud member of the military having served during World War II and the Korean Conflict. He entered the Navy in 1944 at age 17. After two years, he returned home and graduated from high school and in 1951 earned a degree in secondary education from the University of St. Thomas. Dick was in ROTC and went to Air Force flight school at Sampson Air Force Base from 1952-1953. His military career concluded in 1973, after 29 years in the Air Force Reserves. He started his teaching career in Grey Eagle, MN and would go to dances at the Benton County Fairgrounds, where he met Doreen Humbert. They were married June 25, 1955 at St. Mary’s Cathedral in downtown St. Cloud. They moved to southern Minnesota where he taught social studies at Ivanhoe and Sioux Valley High Schools and their daughter, Denise, was born. Dick also coached numerous sports including football, basketball, baseball, and track. He went to summer school and graduated with a master’s in education in 1960 from the University of North Dakota in Grand Forks. Dick and Doreen moved to Prior Lake, MN where they welcomed their daughter, Diane, and son, Rick, and Dick started his guidance counseling career. In 1966, they moved to Hastings where he spent the next 20 years working as a junior high school counselor. He retired in 1986 and they moved to Cold Spring, MN in 1991, where he continued to substitute teach at area schools until he was 75. Dick was a born story-teller who knew a lot of things about a lot of topics. Besides having a great conversation, Dick enjoyed Fox News, fishing, doing crossword puzzles, playing cards, and attending the sporting events of his children, grandchildren and his many favorite teams including the Cold Spring Springers baseball, SJU football and CSB basketball. He was affectionately referred to as the “energizer bunny” by his extended family because while a long-time survivor of heart disease who suffered his first heart attack in 1976, he never gave up and always believed in living life to the fullest. His positivity, humor and love of life will be missed. He is survived by his wife of nearly 63 years, Doreen; daughters, Denise Wozniak (John Sibre), Diane Hageman (John Stemper); grandchildren, Michael Wozniak (Katie), April Wozniak, Nicole Stemper (Andrew Mackey), David Stemper; great-grandchildren, Olivia Wozniak, Harrison Mackey; brother, Will (Ann); and many nieces and nephews. He was preceded in death by his parents; sister, Beatrice (S. Teresene, SSND); brother, Harold; and son, Rick. In lieu of flowers, memorials are preferred to Assumption Campus or Quiet Oaks Hospice House.

The family of Richard B. Hageman created this Life Tributes page to make it easy to share your memories.

Send flowers to the Hageman family.