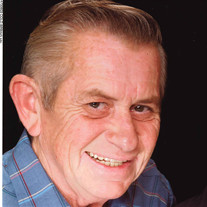 Memorial Services will be 6:00 p.m., Saturday, January 14, 2017 at the Wenner Funeral Home in Cold Spring, MN for Roger Molitor, age 69 who died Tuesday surrounded by his family. Relatives and friends may call from 4:00 p.m. – 6:00 p.m., Saturday, January 14, 2017 at the Wenner Funeral Home in Cold Spring. There will be a celebration of life at Jerry’s Firehouse in Richmond, MN following the Memorial Services. Roger was born in St. Cloud, MN to Alphonse and Dorothy (Bachel). He graduated from Tech High School. Roger was truly gifted as a jack of all trades, entrepreneur and entertainer. He owned numerous successful businesses throughout his lifetime from the early years of Roger’s Drywall to his country music band of Roger and The Red Jackets to his most recent folding wooden clothes rack business. Roger married Eileen Hemmesch on May 16th, 1970 and later divorced. He liked creating anything out of wood and was able to fix anything. Roger enjoyed pleasing others. His family and his dog Max were his most cherished things in his life; he was the happiest with Max by his side and surrounded by his siblings, children and grandchildren. Survivors include his four children, Shelly (Pat Nathe) Doll of New Munich, Scott (Faith) Molitor of Richmond, Travis (Jill) Molitor of Richmond, and Chad (Jackie Lommel) Molitor of Richmond; ten grandchildren, Kimberly and Nick Doll, Brandon, Mason and Hope Molitor, Ashley, Kylie and Wyatt Molitor, Elizabeth (Ted) Freese and Melissa Schmitt; 2 great grandchildren, Carson and Weston Freese; sister, Darlene (Glen Van Nurden) Molitor; brothers, Richard Molitor, Charles (Sharon) Molitor and Dale (Kimmy) Molitor. He was preceded in death by his parents and sister-in-law, Lucy Molitor. In lieu of flowers, memorials preferred.

The family of Roger Molitor created this Life Tributes page to make it easy to share your memories.

Send flowers to the Molitor family.