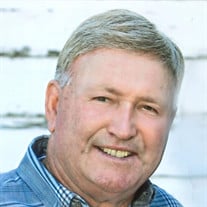 Mass of Christian Burial will be 11:00 a.m., Wednesday, February 16, 2022, at St. Martin Catholic Church in St. Martin, MN for Roman J. Schaefer, age 79, who passed away at the Paynesville Hospital on Friday. Burial will be in the parish cemetery. The... View Obituary & Service Information

The family of Roman J. Schaefer created this Life Tributes page to make it easy to share your memories.

Send flowers to the Schaefer family.