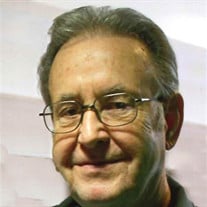 Ronald R. Hoagland entered eternal peace on Tuesday, Dec. 12, 2017 at his home in Sartell, MN, surrounded by family and dear friends, after a short but intense bout of cancer. He was completely ready for his transition from this earthly dwelling and excited for a much better future. Ron, known to many as Hoagie, was born Nov. 6, 1944 to Clell and Hilda (Kutzurik) Hoagland and was raised in Sauk Rapids, MN. Following high school, he served in US Army from 1965 to 1967. Ron was able to "see the world" and referred to his years in the service as some of the best years in his life. After a 7 year courtship, he married Caroline Thomes on March 10, 1978 at Gloria Dei Lutheran Church in Cold Spring, MN and the two made their home in that wonderful community for nearly 40 years. Ron spoke, especially in his final days, about his love and appreciation of the care and friendship that she provided him, even in dark times. Ron and Caroline were proud parents to three girls and were deeply adoring of their grandchildren and also of neighborhood kids. He was truly a father like one would dream to have. He dutifully provided for his family by a long career at NSP/Xcel Energy and then his post-retirement job at the Cold Spring Brewing Company and cherished many friendships from both places. Ron was a man who was a friend to everyone he met. He had a gift of quick wit and a special talent of genuinely making each person he encountered feel seen and special. Ron had a special place in his heart for kids and had special ritials and phrases unique to each of those children, even as they grew to adulthood. Ron was an avid hunter and deer hunting opener was as anticipated for him as a little kid anticipating Christmas morning. He could spend endless hours on the lake fishing and regularly came home with his limit before anyone else at home was even awake. He also loved golf and the friendships the made chasing that little white ball, both locally and on trips with golf pals. Ron was also an avid card player, playing cribbage daily on coffeebreaks at NSP and and endless hours of cardgames with many generations of family. The amount of laughs (and trash-talking) at the card table thru the years are beyond measure. Survivors include: his beloved wife Caroline of Sartell, MN; his daughters Tanya (Lenny) Fraizer of Fargo, ND and Nicole (Bob) Johnson of Pierz, MN; grandchildren Ethan, Carly, Maya and Angela; brother Eugene (Avis) Hoagland of Hawley, MN, sister-in-law Bonnie Hoagland of Sun City, AZ; and dozens of nieces, nephews and in-laws. He loved each of these people dearly and never ceased to show it. Ron was preceeded in death by his infant daughter Rochelle Hoagland, parents Clell & Hilda Hoagland, brother Reinhard Hoagland, father-in-law and mother-in-law Gregor & Lorraine Thomes, brother-in-law Dennis Thomes, nephew Rick Dingmann, nephew Gordon Hoagland, niece Laurie Johnson, and great-nephew Adam Sasse. Friends and family will gather on Saturday, December 16 at Wenner Funeral Home in Richmond, MN from 4-7pm with a 7-8pm Celebration of Memories and Stories, as Ron was very clear he wanted an opportunity for folks to gather and share some laughs. A formal memorial service will be held on Sunday, December 17 at 2pm at Trinity Lutheran Church, 2163 Mayhew Lake Road in Sauk Rapids with visitation between 12:30 - 2pm prior to the service. God bless the memory of this very special man. The angels had best be ready for some laughs!

Ronald R. Hoagland entered eternal peace on Tuesday, Dec. 12, 2017 at his home in Sartell, MN, surrounded by family and dear friends, after a short but intense bout of cancer. He was completely ready for his transition from this earthly dwelling... View Obituary & Service Information

The family of Ronald Hoagland created this Life Tributes page to make it easy to share your memories.

Send flowers to the Hoagland family.