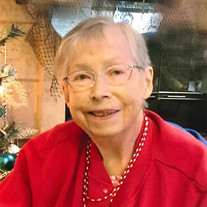 Mass of Christian Burial will be held 11:00 a.m., Thursday, December 28, 2017 at Sacred Heart Church, Owatonna, MN for Theresa Kubicek who passed away on December 22 in Cold Spring, MN. Burial will be at Sacred Heart Cemetery. Visitation will be held on Thursday, December 28 one hour prior to services at Sacred Heart Church. Theresa (Keefe) Kubicek was born February 13, 1930 in Mankato, MN to Frank and Ruby (McCabe) Keefe. She graduated from Good Counsel Academy in Mankato and was united in marriage to Donald Kubicek on July 1, 1961 at Holy Rosary Church in North Mankato. They resided in Owatonna for all of their married life and together modeled a beautiful example of loving commitment for 52 years. Theresa was a devoted wife and mother who cherished time with her husband and family. Her special love for children shone in her work as a teacher’s aide at St. Mary’s School and science aide at North Jr. High in Owatonna. She enjoyed traveling, camping, sewing, baking and canning. Faith was also an important aspect of Theresa’s life. She was a member of Sacred Heart Church serving on the funeral lunch committee and praying at weekly Eucharistic Adoration as well as being an active member of Catholic Daughters Court #1180. In 2015 Theresa moved to Assumption Home in Cold Spring, MN to be closer to family. Although she was an avid reader of several books per week, she found time for many other activities. She nourished her faith by attending daily Mass and also enjoyed exercise, “Let’s Talk” discussion group, music events, and socializing with friends, volunteers, and staff. Theresa’s bright Irish smile and positive attitude brought a ray of sunshine to all who knew her, and she will be greatly missed. A special thanks to all of Theresa’s caregivers and volunteers in Owatonna and at Assumption Home and CentraCare Hospice. Your loving care enabled Theresa to thrive in her final years. Theresa was preceded in death by her parents, husband Donald in 2013, infant son Thomas, sisters Jean and Joan Keefe, Sr. Sharon Keefe, SSND, and Mary Kelly, brother John Keefe, sisters-in-law Leona Kubicek and Renee Keefe, brothers-in-law Pat Simon and Ray Kelly, and son-in-law James Reichmann. She is survived by her daughters Susan (Gary) Kuefler of Avon, MN, and Sharon (Dan) Schumacher of Appleton, WI, brother Francis (Bud) Keefe of Temple City, CA, sisters-in-law Marian Simon and Mary Keefe, brothers-in-law Paul (Delores) Kubicek, Gilbert (Sharon) Kubicek, and Edward (Melissa) Kubicek, as well as many nieces and nephews. In lieu of flowers, memorial donations are suggested to Assumption Home, CentraCare Hospice, or Sacred Heart Church.

The family of Theresa Ann Kubicek created this Life Tributes page to make it easy to share your memories.

Send flowers to the Kubicek family.