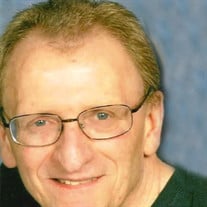 Thomas “Blue” Harren passed away peacefully at his home in Cold Spring on December 21, 2016. He was born on September 23, 1954 to Austin (“Doc”) and Mary Harren. Blue graduated from high school at ROCORI, and graduated from St. Cloud Technical College with a degree in drafting. He started his career as a draftsman at Brown Boveri, and went on to work for more than 20 years as a draftsman at the Cold Spring Granite Company. Blue and his wife, Deborah Frank, met in 1978, were married August 25, 1979, and had three daughters. He had been a member of the Cold Spring Lions Club and had served on the St. Boniface Home and School Board. Blue enjoyed ice fishing, listening to his music loud, camping and campfires, sitting in the warm sun, working out, following his active children, welcoming the addition of his grandchildren, and enjoying 3 o’clock on the lake with a beer. After Blue was diagnosed at the young age of 27 with Multiple Sclerosis, he and Deb made the decision that they would live life as if he didn’t have the disease for as long as they could, and fought the effects of the disease when the time came. He is survived by his wife, Deb, and their children Jessica Jacobson (Jason), Jaclyn Wiechmann (Adam), and Hailey Hollenhorst (Bubba); his six grandchildren, his mother, Mary, his siblings, Sheryl Stewart (Frank), Mary Neisen (David), Jean Birk (Mike), Greg (Sue), Joe (Ann), and Karla Odell and his mother-in-law, Evelyn Frank. He is preceded in death by his father, Austin (“Doc”), his father-in-law, Jerome Frank, his brothers-in-law, Lee Frank, Dave Engelman, and John Odell, and his sister-in-law Barb Frank. Mass of Christian Burial will be 11:00 a.m., Tuesday, December 27, 2016 at St. Boniface Catholic Church in Cold Spring, MN for Thomas “Blue” Harren, age 62. Inurnment will be in the parish cemetery. Visitation will be from 4:00 p.m. – 8:00 p.m., Monday, December 26, 2016 at the Wenner Funeral Home in Cold Spring. Visitation will continue from 9:00 – 10:45 a.m., Tuesday morning at the church. Blue’s family is deeply grateful for all the care, love and support received over the years from St. Cloud Hospital, St. Cloud Home Healthcare, St. Cloud Medical Group, Cold Spring Assumption Home, Hilltop Nursing Home, Cold Spring Police Department, Cold Spring Rescue, Gold Cross and Stearns County Sherriff’s Department.

The family of Thomas "Blue" Harren created this Life Tributes page to make it easy to share your memories.

Thomas “Blue” Harren passed away peacefully at his home in Cold...

Send flowers to the Harren family.