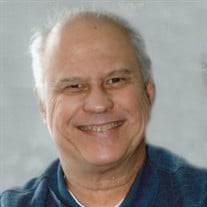 A Memorial Service will be at 11:30 a.m., Wednesday, January 6, 2021 at the Wenner Funeral Home in Cold Spring, MN for Timothy George Jeffrey, age 73, who died at his home on Grand Lake, December 29, 2020, surrounded by family. Burial will follow at the Minnesota State Veterans Cemetery, Little Falls, MN at 2:00 p.m. Masks and social distancing will be practiced and there will be a 50 person at one time capacity at the funeral home. Friends and family may visit from 10:00 a.m.-11:30 a.m. Wednesday morning at the Wenner Funeral Home. Timothy was born in Minneapolis, MN on November 27, 1947 to Frank and Doris (Hage) Jeffrey. He married Susan Peterson on December 26, 1987 in United Methodist Church, Owatonna, MN. Tim graduated from Bloomington High School in 1965. He graduated with a BA from St. Cloud University in 1969 and the University of South Carolina in 1976 with a MSW. Tim volunteered for the US Army during the Vietnam War Era. He was trained and served as a social worker. Tim worked as a social worker and supervisor for many years; mainly for the Developmental Disabilities Unit for Stearns County for 32 years. He spearheaded a permanent change in how people with developmental disabilities were housed and he placed them into homes within the surrounding communities. Tim was a member of the Jubilee Worship Center. Tim loved his boats and fishing in Lake Michigan as well as many lakes in Minnesota. He fished in Cedar Lake as a teenager at his family’s cabin in Aitkin, MN. He started doing taxidermy as a childhood hobby which developed into a small business as an adult. He also trapped as a young person in Minneapolis in the area that is now the freeway and continued to trap for many years of his adult life. Tim, his father, grandfather, and uncle went on yearly deer hunts which were verbally recorded on cassette tape at night in the deer camp. Tim is survived by his wife, Susan; children, Hana and Elisabeth; seven adopted grandchildren, Izzy, Liana, Rosie, and Geraldo LeTourneau and Julia, Mario and Emily De LaGarza. Tim was preceded in death by his parents

A Memorial Service will be at 11:30 a.m., Wednesday, January 6, 2021 at the Wenner Funeral Home in Cold Spring, MN for Timothy George Jeffrey, age 73, who died at his home on Grand Lake, December 29, 2020, surrounded by family. Burial will follow... View Obituary & Service Information

The family of Timothy George Jeffrey created this Life Tributes page to make it easy to share your memories.

Send flowers to the Jeffrey family.