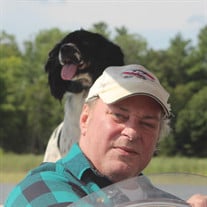 A Private Memorial Service will be held later for Timothy Surma, age 65, who died peacefully, Thursday, January 14, 2021, at the St. Cloud Hospital. Tim was born on December 2, 1955 in St Cloud to Merrence and Marcella (Selinski) Surma. While working as an electrician on a job at First American Bank in 1986 he spotted his future wife, Mary Weis. They were married on June 25, 1988 at St Agnes Parish in Roscoe MN. Tim had a contagious laugh that made the whole room light up, people loved to hear the laugh and it will be missed. He loved to travel and spoke often of his top trips to Brazil, Italy, the tunnel at Chichen Itza Mexico, driving the bio-sphere to Punta Allen and climbing the pyramid in Tikal Guatemala. Tim enjoyed deer hunting at the cabin and spending time at deer camp with his nephews and cousins. Morel mushroom and grouse hunting were two things that he taught his wife about and they shared hours in the woods with their beloved clan of springer spaniels. Tim was so proud of his Dad’s service during WW2 and became a WW2 buff by watching hours of history on tv. I think sometimes he was hoping that just maybe he would see his dad’s face in some of the news reels. Left to cherish his memory are his wife Mary and his four legged friend Tosh Lu; brother, Terrence; sisters, Donna (Terry) Jendro, Mary (Tom) Woldmoe; mother-in-law, Cora Weis; sisters-in-law, Joanne (Roger) Flint, Katie (Roger) Theiler; brother-in-law, Mike Weis; many nieces, nephews, and cousins. He is preceded in death by, his parents; father-in-law, Wishy Weis; his dogs, Chase, Samantha, Maggie, and Brandy. In lieu of flowers memorials are preferred.

A Private Memorial Service will be held later for Timothy Surma, age 65, who died peacefully, Thursday, January 14, 2021, at the St. Cloud Hospital. Tim was born on December 2, 1955 in St Cloud to Merrence and Marcella (Selinski) Surma. While... View Obituary & Service Information

The family of Timothy "Tim" G. Surma created this Life Tributes page to make it easy to share your memories.

A Private Memorial Service will be held later for Timothy Surma,...

Send flowers to the Surma family.