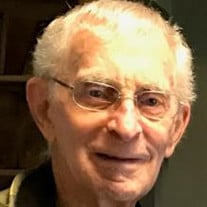 A private graveside service will be held for Wilfred &#8220;Manny&#8221; Ressemann, age 89, who died Saturday at his home surrounded by his family. Inurnment will be at the Sts. Peter and Paul Parish Cemetery. Manny Ressemann was born on April... View Obituary & Service Information

The family of Wilfred "Manny" Ressemann created this Life Tributes page to make it easy to share your memories.

A private graveside service will be held for Wilfred “Manny”...

Send flowers to the Ressemann family.