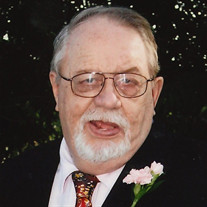 A Memorial Service will be at 7:00 p.m., Tuesday, April 9, 2019 at the Wenner Funeral Home in Richmond, MN for William C. “Bill” Goede, Jr., age 81, who died Tuesday at Assumption Home in Cold Spring. A gathering of relatives and friends will be from 4:00 p.m. – 6:45 p.m., Tuesday, April 9 at the Wenner Funeral Home in Richmond. Bill was born on September 7, 1937 in Jackson, MN to William, Sr and Alice (Ricketts) Goede. He was the youngest of 5 children and raised on a farm. Bill married Mabel Whitehill on August 20, 1960 and they were blessed with 3 children. They moved to Cold Spring in 1968 and he held various positions in the Rocori School District including teacher, principal, community ed director and school board member. Bill loved to sing, play harmonica and was a member of the Central MN Choral. He loved videotaping various sports and activities and directed the first public access channel in Cold Spring. Bill authored “Bill’s Bits” which was a weekly feature in both the Cold Spring Record and the Jackson County Pilot. He volunteered for numerous organizations including the Cerebral Palsy Foundation, Cold Spring Food Shelf, Cold Spring Park Board and reading to the blind over the St. Cloud State Radio Station. Bill was also a member of the Cold Spring Lions. He had an amazing sense of humor and a knack for joke telling. Bill gave a lot of himself to the community and will be greatly missed by all who had the pleasure of knowing him. Survivors include his children, Steve, Susan and her daughter Ashley (Stef) Streamer, Chuck (Jennifer) and their daughters, Hannah, Ella and Ella Harris; sisters, Ruth Murphy and Gladys Marzahn. He was preceded in death by his wife, Mabel; sisters, Mildred Sydness and Ardyce Zens.

The family of William C. "Bill" Goede Jr. created this Life Tributes page to make it easy to share your memories.

Send flowers to the Goede family.